From the desk of Mayor David Rutledge 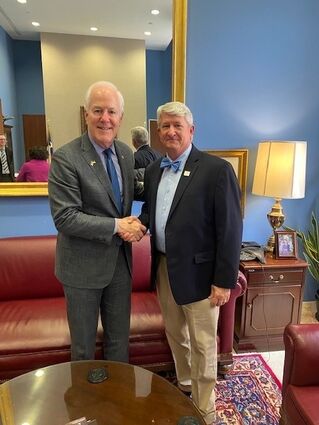 This past week, some of our City Council members had the opportunity to meet with other Councilmembers from the 12-county area that makes up Region 16 of the Texas Municipal League (TML). In attendance at this forum were Council Members Mike Reed, Aaron Roccaforte, Terri Gauthier, and myself. This gathering was part of our ongoing collaboration with other cities to exchange ideas, learn new things, teach others some things we’ve learned, find out how and where to get help with grants, best practices for planning and development, and other subjects important to all cities. Two of our speakers for the evening were from a Houston engineering firm discussing the importance of using professional firms for many aspects of city planning, development, maintenance, and renewal projects. Our second presentation was from the District Recovery Director for the Texas Department of Emergency Management (TDEM) who spoke on the role of TDEM in the recovery effort after a disaster and the requirements for and importance of documenting everything a City does under FEMA rules and guidelines. The Region meeting was graciously hosted by the City of Port Arthur in the Bob Bower Civic Center.

In mid-March, I had the opportunity to attend the National League of Cities (NLC) Annual Conference in Washington D.C. This was a gathering of city officials from every state who meet every year to discuss issues of importance for American cities. The main topics of this conference concerned the Bipartisan Infrastructure Legislation and the American Recovery Plan Act. These pieces of legislation are designed to, among other things, renew the aging infrastructure of the country. The presentations centered around how best to employ these funds at the State and Local levels.

Some of the speakers at the conference included Pete Buttigieg, the Secretary of Transportation and Susan Rice, the President’s Domestic Policy Advisor. A surprise visitor also dropped in: President Joe Biden. (It wasn’t much of a surprise as we had to line up for airport-like security procedures by the Secret Service before entering the conference.) He spoke at length about the Infrastructure Bill, American Recovery Plan, and his domestic policies. Switching gears, he talked about the situation in Ukraine, America’s efforts to assist the Ukrainians, and the tightrope act of giving military aid without triggering an escalating response from Russia. The next day, our conference was privileged to receive a live stream broadcast of Ukrainian President Volodomyr Zelenskyy’s address to a joint session of the U.S. Congress. It was a very moving speech and plea for help from the West to fight the Russian aggressors.

One of the highlights for me was meeting with Senator John Cornyn. TML President Martha Castex-Tatum, TML Past President Mary Dennis and myself as TML President-Elect were invited to meet with the Senator at the Hart Office Building. We had a cordial, informative, and mutually instructive meeting where we discussed some of the upcoming legislation that pertains to states and ultimately cities. Senator Cornyn was very receptive to our ideas and understanding of the issues we face as cities and how the federal government can help us in providing services to our cities and state.

That’s about it for now. See you around town. Take good care of “Bridge City, the Gateway to Lake Sabine.”