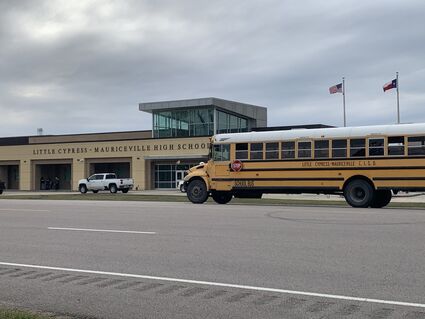 Rising gas prices have hit every household at the pump in 2022. Increased transportation costs have jacked up the prices of almost everything we buy, from groceries to building supplies.

Could those higher prices also affect your tax bill?

Governmental bodies are among the largest bulk buyers of gasoline and diesel fuel, whether it’s law enforcers hitting the streets or school buses delivering our babies safely from home to school and back.

“If it continues the way it is right now, that’s going to be a major concern for us,” Brian Ousley, director of support services for the Orangefield school district, said.

“We have 15 regular bus routes and each bus runs its route four times a day.”

Buses pick up younger students and bring them to school in the morning, then immediately double back to pick up the junior high and high schoolers, whose class days begin later. They repeat the trips in the afternoon.

Orangefield ISD uses between 35,000 and 40,000 gallons of diesel fuel per year to drive its fleet of full-size yellow buses, Ousley said. An additional 8,000 to 10,000 gallons of unleaded gas are needed to power the district’s fleet of vans, SUVs and lawn equipment, he said.

They have been getting a good price on fuel.

“Ten years ago, we got into the TASB (Texas Association of School Boards) Energy Cooperative,” Ousley said. “They operate group purchasing programs for transportation fuel and heating oil.

Orangefield has a contract to buy its diesel fuel for $2.13 per gallon through August of this year, but has had to pay the fluctuating bulk cost for gasoline. That has risen by about $1.50 per gallon in the past year.

The school district will spend about $110,000 this year to fuel its transportation fleet, a total bound to balloon in the future. Ousley doesn’t expect to get a locked-in price for 2022-2023.

“We budget our fuel costs every year out of our local school district budget,” he said. “Normally, we just budget a little more than we spent the past year. We haven’t gotten our fuel price for next year, but I’m sure it will be more than $2.13 per gallon for diesel.

“We may have to pay the rack costs until the market stabilizes more.”

President Joe Biden announced last week he would release from the U.S. Strategic Petroleum Reserve 1 million barrels of oil each day for six months in a bid to lower the price of gas. Oil prices fell about 13% after the announcement.

“The only thing we have going for us is that prices might stabilize with the oil reserves, and there’s only one pool of money we can get money out of," Ousley said.

Debbie Cormier, Pinehurst city secretary, says she expects a budget amendment will be needed to pay for unexpected fuel costs.

Eight county departments had budgets for fuel, oil and gas totaling $536,000. Those included $200,000 each for the Sheriff’s Office and the Road and Bridge Department.

The Sheriff and his deputies purchase their gas at discounted prices at the pump with fuel cards. Road and Bridge maintains a diesel tank at each of its four precinct barns and a centrally located gas tank, according to County Engineer Corey Oldbury.

“We use thousands of gallons,” said Oldbury, who heads up the Road and Bridge Department. “We were tracking well for the first six months (of fiscal year 2022, October 2021 through February 2022), but it seems like it’s going to turn into a problem.

“And don’t forget our asphalt road products are all under the same price increases.”

“It will affect our budget next year if it stays at the current rates it is,” County Judge John Gothia said of the fuel price Tuesday, “because we didn’t figure fuel at the current $3.80 rate or whatever it is. We figured it at $2.19, I think.

“Yeah, there will be a change, but we’re not to that point. The departments have a fuel budget, and there is some cushion built in. But if they get to the end of that budget and we still have a couple of months left, then they will have to come to us to do a transfer of money in their budget in order to cover the rest.”