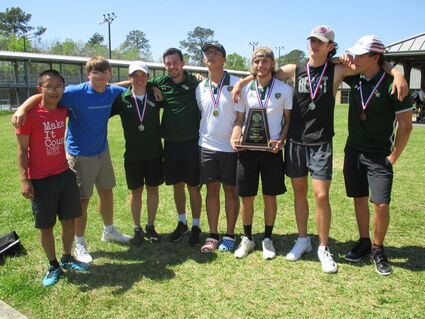 The tennis tournament finals for high schools in District 22-4A were held Friday, April 1, at the Beaumont Athletic Complex. Orange County schools were well represented on the courts.

Little Cypress-Mauriceville took home a team trophy after finishing with the most points in the boys division of the tournament. Silsbee won the overall team trophy for boys and girls competing.

Dax is glad to have a partner like Tex. "I couldn't ask for a better partner, he's one of my best friends I consider him my brother. He's an amazing partner, I wouldn't want to be partners with anybody else on this team," Rodgers stated.

Freshman Carson Forester of Little Cypress-Mauriceville grabbed the silver medal as the runner-up in the Boys Singles competition. Forester lost in the finals to the defending district champion Adam Saenz, a senior from Silsbee, who won the district title for the second year in a row.

Having been playing tennis only since he was in the seventh grade three years ago, Forester has been motivated to do his best. "I've been working hard ever since, and I've kind of stopped playing my other sports to just focus on tennis to see how good I can get and to just keep working," Forester informed. LCM tennis coach Brett Nicholson indicated Forester is the first freshman from Little Cypress-Mauriceville to ever compete in the Boys Singles tennis district finals.

Carson's sister Elaina was half of LCM's top Girls Doubles team with McKenzie Freeman. Forester and Freeman lost in the finals to twins Lauren and Emma Scott Wellman from Silsbee.

Freeman and Forester have only been playing tennis together since 2021. The two seniors have been best friends though throughout their four years in high school together which has benefitted their game.

Elaina explained the benefit of the friendship. "I think we really have a mentally strong game, both of us do, and even what we lack in physical we gain back in mental. We're really good at keeping each other up, we're never down on each other, and we always encourage each other to use our placement and use our communication," Forester said.

McKenzie added the friends also had something to prove. "Even though we just started playing together last year I think it made us really have something to prove. You can do anything you put your mind to, and having my best friend there beside me really helps," Freeman concluded.

The longest match of the day was for the Mixed Doubles championship. It lasted over three hours with the championship being decided in an extended third set with Orangefield taking it 8-6 over Little Cypress-Mauriceville. 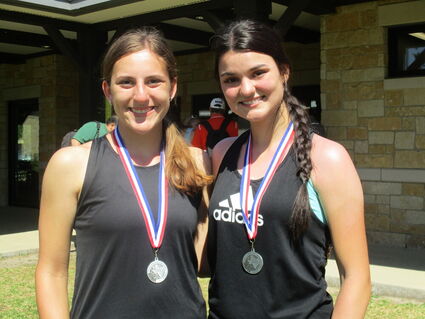 All those that won gold or silver medals qualify for the Regional Tennis Tournament at Bryan High School on April 11 and April 12. Bronze medalists qualify as alternates to the regionals.