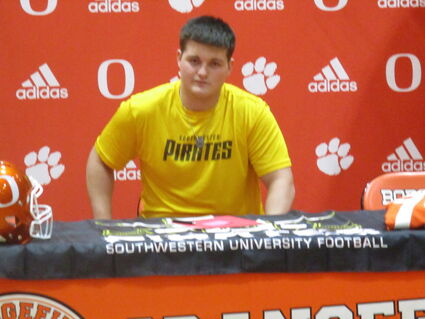 Hunter Norwood of Orangefield signed on April 5 to play football at Southwestern University in Georgetown, Texas

A signing ceremony was conducted Tuesday, April 5, at the Orangefield High School Gymnasium for Hunter Norwood. A star lineman for the Bobcat football team, Norwood is also a member of the Powerlifting Team and an Academic All-American for Orangefield. 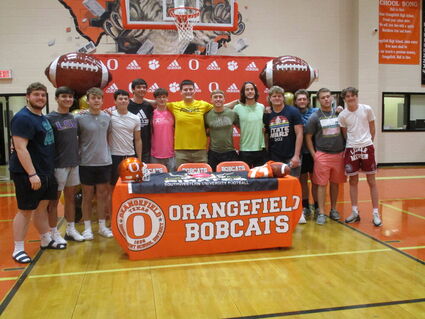 Norwood signed to play football for Southwestern University in Georgetown, Texas. "After my first visit I really, really liked it. I love the campus, I love the teachers they all want to help. They want you to succeed, and then the coaches they'll work with you a hundred and ten percent of the way. It's just amazing, it's an amazing college," Hunter replied.

Athletic Director Josh Smalley was proud to have Hunter Norwood play offensive and defensive lineman for the Bobcats' varsity during Norwood's last three years at Orangefield. "One of the strongest kids I've ever coached in the weight room. Just a good kid and a hard worker. Offensive lineman don't get a whole lot of publicity sometimes, but he was generally happy when other people had success knowing he helped paved the way for those guys to get into the end zone. He's left his mark on the program," Smalley praised.