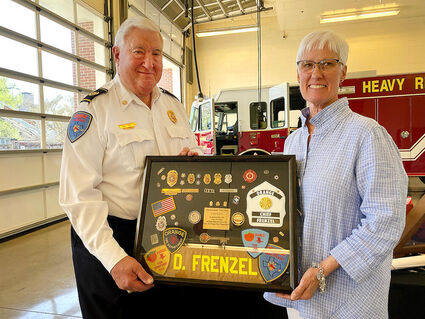 The renaming of that section of the street was announced this past Friday during a reception-retirement party for Fire Chief Frenzel, who is ending his career on April 19, 53 years after he started in the department on April 19, 1969.

It wasn't his only honor. Greg Gravett with the local firefighters union showed artist renditions of a future tribute to Frenzel to be placed outside Central Station. A bronze sculpture of a firefighters hat with Chief Frenzel's name will be erected on a pedestal of stone bricks. The front pays tribute to the longtime chief, while the back lists donors: Sichko Family, Stark Foundation, Walter Riedel, Mary McKenna, Orange Professional Fire Fighters Association Local 1432, and Warren Claybar.

In addition, a shadow box with memorabilia from Frenzel's career was designed and given to Frenzel and his wife of 45 years, Hildy. The box included the "key to the city" the Orange City Council presented him on his 50th anniversary with the department.

Speakers included Ken Kreger, chief of the Conroe Fire Department, who began his career in Orange and worked his way up to deputy chief before leaving for Conroe. Other former deputy chiefs attending included Jerry Ziller, now a fire safety manager with Exxon Phillips in Orange, and Lee Anne Brown, who recently retired to go to an industrial safety job.

Fire Marshal John Bilbo, who will be acting chief, talked about Frenzel needing a new key to his office. He said Frenzel is the only person he knows who works so much that he has worn out his office key. Bilbo said when he arrives at work at 7:30 in the morning, Frenzel is already at work, and the chief stays late.

Last week, the chief came to work in the morning to find the key to his office in the new Central Station, which opened 10 years ago. Frenzel oversaw the construction of the new station to replace the one that flooded during Hurricane Ike in 2008.

Also, people talked about Frenzel's dedication to the local Boy Scouts and his years as a troop leader. During those years, Frenzel oversaw 75 boys earn Eagle Scout honors.

Frenzel considers one of his major accomplishments getting the city's Insurance Services Office (ISO) rate to Class 2. He has estimated the high rating saves city homeowners an average of $100-$200 a year on fire insurance. The rating is based on things like firefighter training, distance from fire hydrants, water pressure, and condition of equipment.

Orange has the only paid, fulltime professional fire department in Orange County. The department eliminated volunteers in 1960.

When Frenzel started in 1969, he said he had no training. He had been going to Lamar Tech (Lamar University) and sometimes hung around the fire station talking to friends. Chief Vertis Sands called him on a Thursday and asked if he wanted to join the department on Saturday as an emergency hire.

Frenzel has talked about going to get Dickey work shirts and pants at a local department store and showing up for work. He was given a bunker coat and helmet, and told to jump on a truck if an alarm came.

"It was all on-the-job training," he said.

Now, firefighters have extensive training classes and all kinds of modern equipment. No more riding on the back of the truck hanging onto a bar. The fire trucks won't start until the crew has seat belts on.

Frenzel worked at city fire stations that have been closed, like the one at Tenth and Burton, and the one on MacArthur Drive that was next to Lions City Park. The stations on Allie Payne Road and Martin Luther King Jr. Drive were built in the years after he joined the department.

He said he worked with 11 city councils plus 12 mayors "and got along with all of them." He's reported to three different city managers in his 25 years as chief.

"Thank God for giving me Hildy," he said. His voice choked a bit when he talked about his family and how his job often took him away from them.

The Frenzels have two grown sons, Dave and Adam. Both were valedictorians of their graduating classes at West Orange-Stark High. Dave and his wife have three sons. Adam and his wife had a daughter and a son.

Frenzel told the crowd he plans to spend a lot more time with his grandchildren when his retirement begins. Both families live in the Houston area within a couple of hours' drive. But the kids may be spending more time in Orange this summer because grandfather and grandmother installed a backyard swimming pool a couple of years ago.