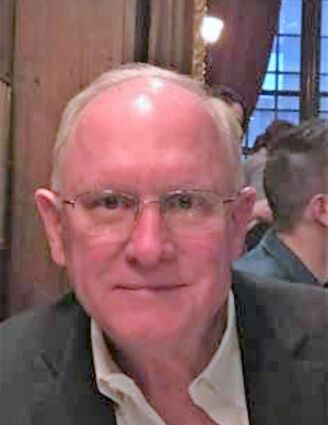 Larry Charles Hunter, 69, passed from this life into the grace of God our father with his wife and two children, their spouses and grandchildren at his side in the early morning hours of Sunday, April 10, 2022 at Baptist Hospital Beaumont.

He was born on July 8, 1952 in Texarkana, Texas and was a lifelong resident of Vidor.

He married Becky Jean Smith in 1974. He started his law practice alongside B.E. Wharton, then partnered with Buddy Hahn at Hahn & Hunter, followed by a sole practice at Law Offices of Larry C. Hunter, partnered with Courtney Burch at Hunter Burch, LLP, followed by a partnership at Provost Umphrey Law Firm and then a partnership at Ferguson Law firm up until his death.

He had the honor and privilege of being a part of a case argued in front of the Supreme Court of the United States.

Larry was involved in his community, in legal circles, and most of all with his family. As an attorney, he had the privilege of helping many clients with all their legal needs and any who suffered from injuries. Many were already good friends or became friends after meeting with him.

He loved the law and loved being an attorney and felt honored to help people. Larry had a strong sense of justice and strived to secure it for his clients. Larry's friends joked about how often he would tell them how much he loved his wife, especially after a scotch or two, his favorite beverage.

He loved his children and grandchildren to the max, always assuring them the latest toys and gadgets. Larry's life was full. He worked hard and traveled to many interesting destinations. He loved good food and great scenery. From scuba diving to snow skiing to motorcycling riding, hunting and fishing, he did it all with his family and friends. His motto was always "Work Hard, Play Hard".

He will be mourned by his many close friends, as well as his loving family.

Larry was preceded in death by his parents, Charles and Dorothy Hunter, his father-in-law and mother-in-law, Luther and Ercell Smith.

He is survived by his wife of 48 years, Becky Hunter, his daughter, Melissa Hunter Ashlin and her husband Grant Ashlin, and his son, Grant Hunter and his wife Catherine Hunter, his sister Janet Cooksley and husband Robert Cooksley, sister-in-law Kathy Woods and husband Ronnie Woods, as well as his grandchildren, Madison Hunter, Taft Hunter, Reid Ashlin and Rhett Ashlin, and a host of cousins, nieces, nephews and friends.

Memorial service will be held at First Baptist Church in Vidor on Friday, April 15, 2022 at 10:00am with visitation beginning at 9am with Reverend Terry Wright and Reverend Patrick Miller officiating.

His family would like to publicly thank Dr. Leldon Sweet, Dr. Michael Smith, Dr. Michael Oszczakiewicz, Dr. Stevens, Dr. Dean and all of the ICU staff at Baptist Hospital for the excellent medical care given to Larry during his short hospital stay.

Most of all, they would like to thank their loving extended family and friends for the outpouring of love and support during this most difficult time. They feel blessed for the time they had with their loving husband, father and grandfather "YaYa".