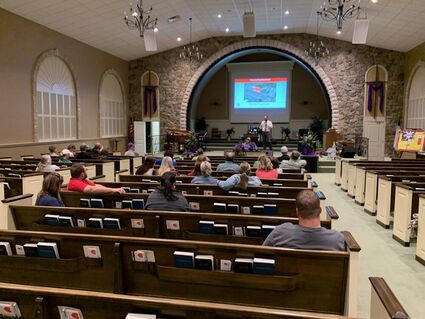 A gathering of about two dozen people listened as Bridge City Superintendent Dr. Mike Kelly narrated a presentation explaining two construction bonds being voted on by taxpayers May 7.

"If not now, when?" is a question proponents of Bridge City's two-proposition school bond election have been asking a lot in presentations to the public the last couple of months.

To which Peggy Prosperie says, "Let's wait 10 years, until after the high school bonds are paid off."

Prosperie, who is running for a spot on the Bridge City school district board on the May 7 ballot, reports the district still owes $14 million on the 30-year bonds purchased to build the high school on Texas Avenue two decades ago.

"I want to be a voice for the hard-working citizens and families who are struggling financially these days between Covid and inflation," she said. "The School Board of Trustees' job is to manage the operations of the district.  That includes being fiscally responsible with the citizens' tax dollars."

The citizens of Bridge City voted down two previous bonds that would have built a new middle school and performing arts center.

Kelly, beginning his second year on the job, explained that ordering facility and demographics studies were among the first things he did upon taking the job last year.

Those studies showed him, he has consistently stated, that the district is experiencing constant growth and that the middle school had outlived its usefulness.

The demographic study predicted school district enrollment would grow by 400 students in 10 years. Among the many things wrong with the middle school is a shortage of bathrooms.

Prosperie was one of two people who questioned Kelly's statement that both the high school and middle school had exceeded capacity with their enrollments.

The questioners had multiplied the number of rooms in each building times the Texas Education Agency's maximum number of students per classroom and ended up with more capacity than BC has middle and high school students.

Several of the BC teachers attending the public meeting at the First Baptist Church pointed out that not every room would be in use all the time, because of teachers' using them for their conference periods.

Also many classes don't have capacity enrollment because they address special needs with small class size or require room for equipment to learn a skill on, such as a shop class.

Discussing the need to replace the middle school – and if that proposal passes, the new one would be built on a greenspace across the street – Kelly pointed out it would cost more than $50 million to renovate the current school, not a big savings of the $57.7 million required to rebuild from scratch.

That $50 million figure includes $10.6 million for 30 portable buildings to teach classes in during the two years repairs would take.

"And after we're done, the community has nothing to show for that $10.6 million," Kelly said.

Prosperie asked for a breakdown of renovation costs and Kelly said he could not provide to the public the individual figures arrived at after consultation with three different construction firms. Their breakdown would eliminate the possibility of lower bids if the bond is approved and the process gets that far, Kelly said.

"It's all repairable," Prosperie maintained.

A commercial contractor in the audience said his restaurant construction company rebuilt each chain store every 12 years.

BCISD's current tax rate of $1.01 per $100 of property tax value is the lowest for Orange County school districts.

Voting in favor of both would raise the tax rate 21 cents.

That would put Bridge City third-lowest among the five county districts.

"To me, it's so logical," said a bond supporter with school-age grandchildren. "I don't want to to pay more taxes, but it makes more sense to put something into capital improvements instead of band-aids.

Early voting begins Monday, April 25 and wraps up Tuesday, May 2 at one of four early voting centers.

Bridge City ISD's Administration Building is among them.