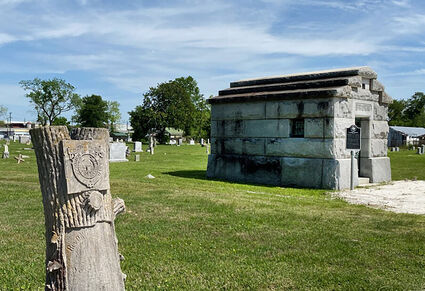 Hundreds of vehicles travel along Border Street in Orange each day as workers go back and forth to chemical plant jobs. They pass the town's oldest community cemetery with tombstones, mausoleums, and markers showing the resting grounds of some of Orange's most prominent, plus lesser-known, residents through almost two centuries.

Evergreen Cemetery between Border and Tenth Streets and along Jackson Street has at least 7,500 burials, with the oldest known back to 1840, according to a Texas Historical Marker at the site. The cemetery was segregated, as most were in those days, and was for white people.

On Sunday, April 24, Heritage House Museum is sponsoring its third annual Cemetery Walk. The hours will be from 2 to 4 p.m. The event is in conjunction with the Evergreen Cemetery Board of Trustees. Donations will be collected at the gate and divided between the history museum and the cemetery.

Heritage House this year is featuring the burial sites of Fannye Brown Moore, the daughter of Dr. E.W. Brown and Carrie Lutcher Brown. Fannye Moore died at the age of 29 of pneumonia in October 1918 as the Great Influenza pandemic swept across the world. Her obituary said she had been unselfishingly nursing the sick when she fell ill. Her daughter, Brownie Babette Moore, was the first baby Christened at the First Presbyterian Church Lutcher Memorial when it opened in 1912.

Also on the cemetery walk will be the gravesites of Ruby Childers Stark and Nelda Childers Stark. The two sisters, natives of Orange, were married to H.J. Lutcher Stark. Miss Ruby was Stark's second wife, who he married after the death of his first wife, Nita Hill Stark. After Miss Ruby's death, Stark married her sister, Nelda.

Another site will be Thomas A. Howell, a local architect and builder whose designs include the Gothic-style First United Methodist Church in downtown Orange. Howell was also a member of the Orange School Board and the Orange High Tigers once played in Howell Stadium, named in his honor.

People will also be able to stroll around the cemetery to look for ancestors, people they knew, or interesting gravestones. Adam Conrad, president of the Heritage House Museum board of directors, said people should wear comfortable walking shoes and be careful of uneven grounds. Water will be provided.

One of Orange's most well-known historical references is what R.E. Russell wrote in 1911. He had moved to Orange as a boy in 1854 and 71 years later wrote his remembrances of living in Orange, which was then named "Green's Bluff."

He said the first funeral he attended was in 1854. "The school children all marched down to the cemetery to the burial of Mrs. Ann Kirkham. The first person buried in Evergreen Cemetery was a Mrs. Nugent. She was buried there in 1840; so you see that has been a cemetery for at least 71 years. There are more graves lost in there than there is in sight today."

The historical marker says the cemetery was long called "City Cemetery" and by 1898 was called "Evergreen." Robert Jackson in 1853 bought 35 acres of land including the cemetery, which already had graves. At some time, Jackson Street was cut through between Border and 10th streets to cross the cemetery. Some caskets were removed to new sites, but not always marked. A few marked graves are on the north side of Jackson Street, across from today's main cemetery.

People on the cemetery walk will also be able to see tombstones and markers with military insignias and those of fraternal organizations. A tour guide will also explain why dozens of the graves are marked with designs of concrete sculptures of tree logs. (It's not because of the timber industry.)