Orange's pump station is only one in Orange County, 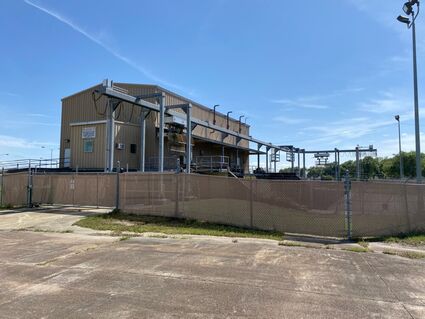 Orange's pump station is only one in county. Corps of Engineers plans seven

When heavy rain is in the forecast or starting to come down, the city of Orange has the Sabine River pump station to help get water quickly out of the part of town drained by Cooper's Gully.

The station, built in the 1960s, is the only drainage pump station in Orange County. But that will be changing when the U.S. Army Corps of Engineers builds of a countywide "flood and storm damage reduction system" around the southern part of the county.

Most people think the proposed system is all levees and seawalls being built to protect against sea rise and a hurricane storm surge. But the system's plans include seven new pump stations that will enhance the drainage system.

Orange Public Works Director Jim Wolf said the Cooper's Gully pump station will be replaced with a new one. He said the Corps of Engineers plans include pump stations at Adams Bayou and Cow Bayou, and one in the vicinity of Blue Bird Fish Camp off the north end of Simmons Drive.

Citizens will get a chance to see and comment on the proposed system during special meetings next week. The first meeting will be Tuesday, April 26, from 5 to 8 p.m. in Bridge City at the community center on Parkside Drive. The meeting in Orange will be Thursday, April 28, from 5 to 8 p.m. at the American Legion Hall, 108 Green Avenue. Finally, a Saturday meeting is set for April 30 from 10 a.m. to 2 p.m. at the Orange County Expo Center, 11472 FM 1442.

The U.S. Army Corps of Engineers in Galveston is overseeing the multi-billion-dollar project and Congress has approved more than $2 billion for the project in Orange County. The state of Texas has also set up ways to contribute funding for flood prevention projects.

The Orange County section, which is planned to be the first built, will have 15.6 miles of new levees ranging from 12 feet to 17.5 feet high. The heights will be based on sea level elevations of the properties. Another 10.7 miles will be seawalls of heights from 13.5 feet to 16 feet.

The Orange pump station is off the south end of Simmons Drive at the area of the City Boat Ramp. Wolf said it was build in the 1960s and the city spent about $5 million a decade ago refurbishing it. Some of the money came from federal Hurricane Ike recovery grants.

He said the pump station works well to get water into the river as it drains down Cooper's Gully. The refurbishing included adding a "Dutch process" debris removal system. It was invented by the Dutch, who are known for protecting their land from sea encroachment and storms.

The system has screens to remove debris of all sizes from tree branches to fast food wrappers as the water is being pumped from the gully into the river. The automatic system periodically takes the collected debris and in a conveyer-type design, rolls it outside to be dropped into waiting collection dumpsters. The debris can then be taken in a garbage truck to a landfill.

Wolf has been working more than a decade to get more parts of Cooper's Gully lined with concrete. He said the concrete makes it easier for crews to remove vegetation that grows in ditches and gullies. The vegetation growth can hamper rainwater from draining quickly.

Cooper's Gully is a natural drainage outlet in Orange that has been widened and deepened through the years. The gully can be seen by travelers on 16th Street by Cordrey Avenue. It then winds its way southeast to the Sabine River. The drainage area is south of Interstate 10.