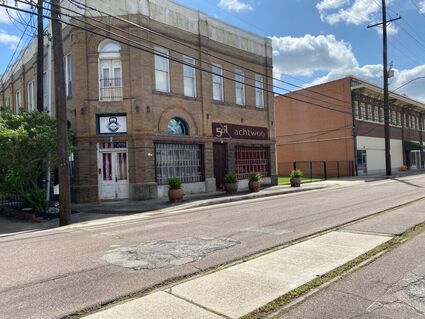 Buildings and railroad tracks on Front Street along the Sabine River have historic significance that should be considered in the design of the levee-seawall-pump system being design by the U.S. Army Corps of Engineers for Orange County.

Almost all of the property with historic value that will be affected by the levee-seawall-pump station system are along, or near, the Sabine River in the city of Orange.

The U.S. Army Corps of Engineers has been working with the Texas Historical Commission to survey and preserve historic sites that will be affected by the flood prevention system to be built around the southern side of the county and up along part of the eastern side.

In a survey completed last year, the Historical Commission reported reviewing 1,140 resources in the county and checking them for age and historical significance. Some of the sites could be added to the National Historic Register, according to the survey.

The report says, though, that the petrochemical plants along FM 1006 and the Sabine River on the southern part of the county are not necessarily historical. The plants listed are DuPont Sabine River Works, Firestone, Chevron-Phillips, Spencer, and Allied. Some of the plants have

changed owners and names since the report.

The plants could be historically significant if brought into a story line of industry in the county running from shipbuilding and lumber in the 19th Century to petrochemicals in the 20th Century.

Of course one of the historical places to preserve is the main three-story Orange County Courthouse at 801 Division Avenue in Orange. That does not include the administration building on Sixth Street, which was converted from a metal building 30 years ago erected for temporary jail cells.

County officials are in the planning stages to get a new site for the administration building, which holds offices for the commissioners court, the county judge, tax office, treasurer's office, economic development office, personnel office, and others.

The report says a "thematic corridor" for railroad history could be developed along the river area in downtown. The area including Front Street, was the site of an early Texas railroad company, The Texas and New Orleans Railroad, that was built in the 1850s before the Civil War.

A fragment of the railroad still exists.

The railroad theme could also include the Orange and Northwest Railroad which is at the end of Western Avenue and South Market Street.

Other areas in downtown listed as possibly historically significant include Farmers Mercantile on Division at Sixth, and the Achtwoo building at 501 Front. The Achtwoo building, constructed originally as a saloon, formerly housed the C. Delle Bates studio and Reliable Cleaners. Both fit into the categories of architecture and commerce.

Also fitting under the categories are buildings from 109-129 South Fifth Street.

Even though the levee designs do not go near the old Orange City Hall, the report pointed out the building as historically significant because of its architecture and city planning. The building was listed as the Edgar Brown Jr. home because he had it constructed in 1924. The city bought it for city offices during World War II.

The survey did not include the Navy Park area, parts of which are already on the National Register of Historic Places.

The report says Emma H. Wallace High School could qualify for the national register along with the city's brick water tower on Turrett Road, which is notable for its design and the category of planning and development.

Several places in the Cove neighborhood deserve consideration, including the Levingston House at 814 South College Street. The report listed an area called the "College and Moss Historic District" for its houses built between 1891 and 1930. A residence at 205 South College, built in the Queen Anne style, was deemed significant Areas along the river that could be part of a thematic corridor for the

Though at this time, the levee-seawall-pump project does not go as far west as the Clairmont subdivision, the survey said it is an example of post-World War II community development. A number of ranch-style houses on Ruby Lane, Butler Road, and Byron Road were listed as examples of the post-war architecture.

The Starlight Historic District was also named for more post-war development and for African-American history.