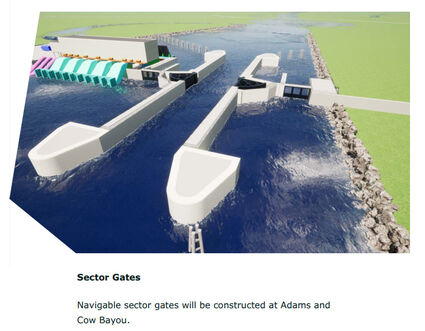 Navigable sector gates will be constructed at Adams Bayou and Cow Bayou.

The construction of a 25-mile levee system around Orange County is now slated to begin in 2024 and be completed by 2028.

Local residents are getting an update on the planning in three public open houses this week put on  by the Army Corps of Engineers and the county's Drainage District.

But the Corps' Galveston District Engineer and Commander, Col. Tim Vail, says it's not just the locals he's trying to impress.

While Congress has approved $2.4 billion to build the Orange Project and more money to raise existing floodwalls in Port Arthur and Freeport, the $29 billion Coastal Texas Study plan to protect the Houston Ship Channel and Galveston from future hurricanes still awaits Congressional approval.

"As we succeed here (in Orange County), we're giving the sense of confidence to allow for authorization of all that additional work," Vail said. "We want to get the alignment right, get us into construction and provide the strategic momentum to convince the halls of Congress that we're on the way.

"We're getting it done right. This is a mature state with a mature plan that can deliver coastal resilience and be the model for the rest of the nation."

The Port Neches couple has been wanting to build on their lot between Bessie Heights Road and the Entergy plant. They came out to the Bridge City Community Center Tuesday night to get an update.

"We've owned the lot for seven or eight years and every time it rains, we need a boat or a high truck to get there," Kim Mires said.

A 2017 feasibility study map had the levee going right through what would be the property's back yard, but Tuesday the Mires were told the latest design moved the levee about 150 feet south of their property.

"I think we can still build," she said, "and not worry about flooding."

Casey Holden of Bridge City was impressed with what he saw during the first open house Tuesday.

"It seems like they're explaining it very well," Holden said. "And they're set up pretty good. I like it."

This week's presentations include a new 2022 map of the Orange Project, which will run just alongside Bessie Heights Marsh from below Tanglewood Drive. It dips around the Entergy plant and Bridge City, then along the Sabine River beyond downtown Orange.

Little of the land required for the project is in private ownership, which should speed up the acquisition phase. The alignment is 80% final, according to Don Carona, Drainage District manager.

Vail said the Orange County Project is already 100% funded by the federal government, allowing engineers to start their pre-construction planning.

Technically, the cost share on the project is supposed to be 65-35, meaning the federal government would provide $1.55 billion while non-federal partners are to pay $836 million.

Orange County and the Orange County Drainage District are acting as non-federal partners to start the project but neither entity expects to have to pony up when the note comes due in 30 years.

"The Texas Legislature has appropriated $200 million the last two sessions for this project."

The Gulf Coast Protection District, which Orange County is part of, will ultimately pay for the upkeep of the project. GCPD Executive Director Nicole Sunstrum said before making and announcing funding plans, the GCPD is awaiting final plans and cost estimates.

To mitigate the project's unavoidable environmental impacts, plans call for restoration of approximately 450 acres of coastal marsh and 560 acres of forested wetlands.

Orange County Judge John Gothia, who has been involved in the project since he was elected a County Commissioner in 2017, pointed out how important the Orange County Project is to the whole country. 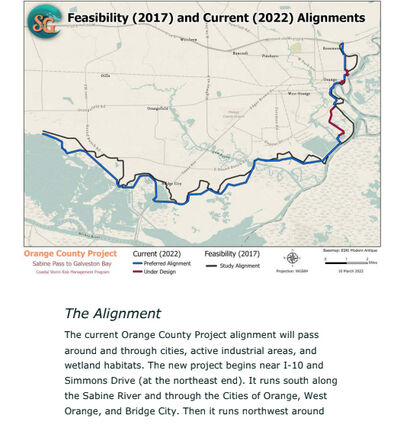 The Army Corps of Engineers has a new map of the Orange County levee plan that includes both its first alignment in 2017 and the newest 2022 alignment for 15 miles of earthen levees and 10 miles of concrete floodwalls. A floodwall will protect downtown Orange but the exact alignment has not been settled upon.

"That's how important this project is. This is a tremendous opportunity we have. The ability to have this kind of funding doesn't come along but once in a lifetime. We don't want to waste that opportunity."