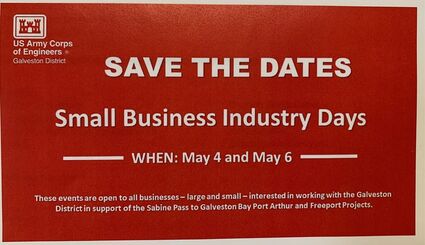 Orange County small businesses are invited to learn more about the contracting process in support of work opportunities for the Sabine Pass to Galveston Bay projects in Freeport and Port Arthur next week.

A separate Orange County event is planned at a later date to address specifically the Orange County project for potential vendors and subcontractors, but a date and location has not been set. A spokesman said everyone was welcome to attend next week’s meetings in Port Arthur and Freeport to learn about opportunities.

The US Army Corps of Engineers Galveston District, Jefferson County Drainage District No. 7 and the Velasco Drainage District will host the networking events from 9 a.m. to 11 a.m. Wednesday, May 4 at the Lake Jackson Civic Center, 333 Texas 332 in Lake Jackson; and from 9 a.m. to 11 a.m. Saturday, May 6 at the Carl Parker Multipurpose Center, 1800 Lakeshore Drive in Port Arthur.

Port Arthur, Freeport and Orange County are three projects featured in the Federal and State effort to protect the Texas Gulf Coast from flooding caused by hurricanes.

The Orange County project will be at least 25 miles of earthen levees and concrete seawalls extending from Bessie Heights Marsh around Bridge City and along the Sabine River north to Interstate 10.

The project is scheduled to begin construction in 2024 and be completed by 2028.