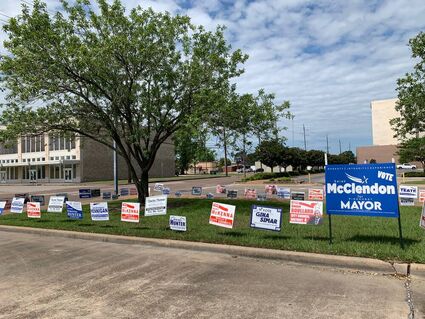 This is the first time he's ever had an opponent.

"Since 2006, I've been elected every two years, but I've never put a sign up until now," he said. "Every year, only three people ran for the three seats, so there really was no election."

In all, 40 candidates are seeking 20 contested seats on Orange County city councils or school boards in the May 7 election. Fifteen of those candidates are after seven slots in Vidor government.

Shugart said he got on West Orange's council in 2006 when Meritta Kennedy resigned to take care of a family member. Shugart joined Dale Dardeau and Shirley Bonnin as council members up for election every even-numbered year.

Kennedy rejoined the council in an odd-numbered election cycle, replacing Randy Branch, who moved to mayor after the retirement of 26-year mayor Roy McDonald.

This year is different. Both Dardeau and Bonnin chose not to file for reelection. Shugart is one of four candidates signed up for the three at-large spots this year.

He's on the printed ballot along with former council member Frances Droddy-Lopez, who also had stepped aside to care for an ill family member; Jay Odom, a runnerup in the 2021 council election; and Lanie Brown, regional director for U.S. Rep Brian Babin.

The three candidates who receive the most votes will take office later this month.

Other Orange County election notables include the presence of husband and wife "concerned citizens" Kenneth and Peggy Prosperie as candidates for city council and school board in Bridge City.

Both have campaigned against the BCISD school bond propositions for spending up to $72.4 million to build a new middle school and career technology education center.

Kenneth has run unsuccessfully for council several times while Peggy Prosperie, like Shugart, is on a printed ballot for the first time. After spending more than a decade as caregiver for a family member, she says that job has ended and she's focusing her energy on her hometown.

Prosperie is on the school board ballot against Rebecca Rutledge, current board president and wife of Bridge City's mayor, David Rutledge.

West Orange-Cove's school board race has been characterized by some as a protest of January's 4-2 board vote to accept Superintendent Ricky Harris' nomination of Hiawatha Hickman as athletic director and head football coach.

Those who disagreed have said over and over it's not about Hickman, but the fact they wanted the job to go to former assistant coach Toby Foreman and don't believe the selection process was fairly conducted.

They note that rumors of Hickman's hiring circulated long before the anticipated retirement of coaching legend Cornel Thompson after a year of COVID-related health problems.

All three of the incumbents in this year's election – board president Linda Platt-Bryant, Demetrius Hunter and Gina Simar -- voted for the superintendent's choice.

But the three running against them – John Jefferson Jr. Erick Guillory and Donny Teate Jr. – have centered their campaigns around the issues of the need for better discipline, better test scores and better spending priorities.

All voters in this election will see two state-wide propositions on their ballot which seek to lower school taxes on homeowners.

This is the second election this year and will be followed quickly by another – the primary runoff election for those county, state and federal office-seekers looking for a spot on November's mid-term election.

Early voting runs from May 16-20 and Runoff Election Day is May 24.

"The issuance of $14,700,000 of bonds by the Bridge City Independent School District for school facilities (including but not limited to the construction of a new 9th Grade to 12th Grade high school career and technical education center), any necessary or related removal of existing school facilities, and the levying of a tax in payment thereof. This is a property tax increase." (Vote For or Against)

All ballots will include:

"The constitutional amendment authorizing the legislature to provide for the reduction of the amount of a limitation on the total amount of ad valorem taxes that may be imposed for general elementary and secondary public school purpose on the residence homestead of a person who is elderly or disabled to reflect any statutory reduction from the preceding tax year in the maximum compressed rate of the maintenance and operations taxes imposed for those purposes on the homestead." (Vote For or Against)

"The constitutional amendment increasing the amount of the residence homestead exemption from ad valorem taxation for public school purposes from $25,000 to $40,000." (Vote For or Against)