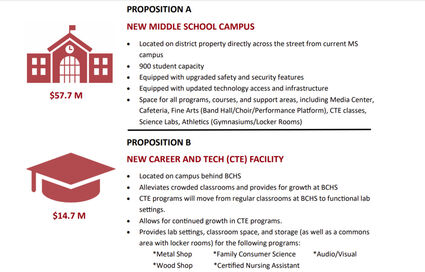 Bridge City school taxpayers agreed by about a two-thirds majority to pass two bond propositions totaling $72.4 million in an election that ended Saturday.

The propositions would tear down a middle school building that has served the district for nearly 60 years and build a modern replacement across the street, at a price tag of $57.7 million; and build a new high school career technology education center, for $14.7 million.

The 2022 votes, pushed hard by Superintendent Dr. Mike Kelly and a pro-bond committee in a series of public meetings, were flip-flopped from those other elections in the past decade.