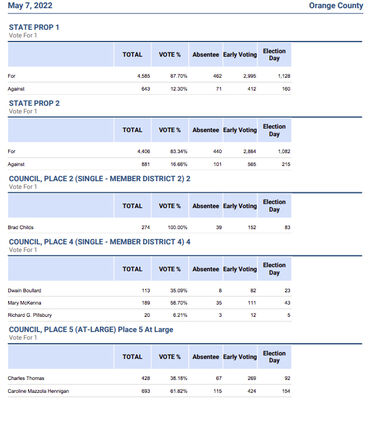 Incumbent members of Bridge City's school board and city council won their bids for reelections in results announced after the close of voting Saturday.

Current Place 2 councilman Mike Reed defeated former councilman Carl Harbert 631 votes to 517 (55% to 45%) and Bridge City school board president Rebecca Hall Rutledge won 71.8% of the vote (1,525-600) over Peggy Prosperie in the only two contested BC races with a sitting incumbent.

Other uncontested Bridge City seats on the May 7 ballot were Mayor David Rutledge and, on the BCISD board, Thad Hill (Place Four) and Jerry McInnis (Place 5).

The only contested mayor's race in the county was in Pinehurst, where Sarah McClendon, the current mayor pro-tem, won with 69.6% of the votes cast (94-41) over councilman Johnny Asevedo.

Asevedo's council seat is not up for reelection until 2023.

In Orange, incumbent city councilwoman Mary McKenna avoided a potential runoff in a three-candidate Place 4 race by grabbing 58.7%, or 189 of the 322 votes cast.

The three incumbents up for reelection in a six-way free-for-all for three West Orange-Cove school board at-large seats won reelection.

Voters were allowed to vote for three candidates in the WOCCISD board election.

Vidor's Ward Three City Council election will require a runoff as no candidate in a three-man race was able to reach a 50 percent plus one majority of the vote.

Gary Herrera squeezed past Anthony Foster in the Vidor Ward Five council race, 50.3% to 49.7%. The three-vote margin could result in a recount once Saturday's totals are finalized next week by the Orange County Elections Administration Office.

For Vidor school board, Kimberly Mahana Crossley won Position 1 706-521 versus Paul Davis; David Camp won 791 votes for Position Three over Lance Loftin's 424 votes; Gina VanDevender racked up 807 votes against 419 for Jalissa Green-Droddy in Position 4; and Mike Marion was a 702-525 winner over Rodney White for Position 5.