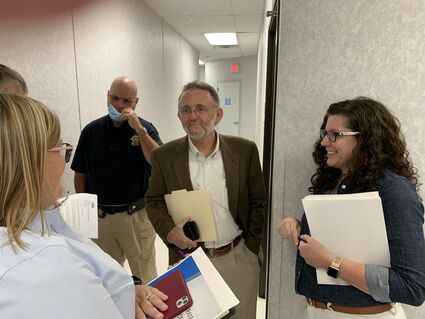 When Melinda Smith takes care of business, Orange County gets better and better.

And her business has been very, very good for her employers and clients recently.

Smith, Executive Vice President & Director of Program Development for Traylor & Associates of Tyler, is a grant administrator retained by Orange County and its cities to help navigate the thorny path to federal and state disaster funds.

So far, her fingerprints are on total awards of $137.3 million for Orange County projects and she’s hoping to double that with bigger projects that are currently pending review.

A $100 million project proposed by the Orange County Drainage District to widen and extend the Sabine Relief Ditch along the northern part of the county from the Sabine River to Cow Bayou is awaiting federal review.

“They are doing an incredible job,” Don Carona, general manager of the Drainage District, said. “I wish we’d have gotten Melinda Smith and Traylor a lot sooner.”

Smith is a native of Gilmer, Texas, about a half-hour drive from Tyler, Texas, where Traylor & Associates has operated since 1985 under founder Gary Traylor.

Its specialty is doing grant prep and management for Texas’ smaller cities. It now has about 15 employees, Smith said, spread between the Tyler location and a second office in Newton.

More than 100 local government entities are Traylor clients and they’re in a tough, competitive environment when it comes to writing proposals and winning grant awards.

Smith began her career with a dozen years as a legal secretary before a short time at a title company. She first did grant work for a third company for six years before jumping to work for Traylor two weeks before Hurricane Harvey hit the Gulf Coast.

“I came and ate lunch and met everybody in Vidor. It was when Mike Kunst (Orange’s city manager) was there (doing the same job for Vidor). And then, just like everybody, I watched in horror on TV as Harvey happened.

“We would have preferred a break from disasters for Orange County in particular,” Smith said.

“This job, you either love it or hate it. There’s no in between. There’s a lot of late hours, long days, lots of miles driven, but I can’t imagine doing anything else.”

What Smith does is stay current on the latest grant opportunities and attend endless meetings to learn the ever-changing rules that go with every program, then works with her clients for the best results.

She works with the assistance of Traylor's Linda Atkinson-Pettee to keep track of it all and, on a recent trip to Orange County, brought along engineer Kaitlin Fox Brown, who handles environmental site assessments.

Most disaster grants are paid as partial reimbursements for money already spent by a government. For instance, Orange County spent about $15 million to clear debris left almost two years ago by Hurricane Laura. A FEMA check for $10.4 million hit the county’s bank account in late April. Another $1 million or so is expected any day now.

That’s slow, but actually a pretty fast recoupment of funds from FEMA. When Smith arrived on the scene, the county was still awaiting reimbursements from 2005 and Hurricane Ike.

“Melinda Smith is just extremely dedicated and works really, really hard,” Carona said. “It’s just amazing what she’s doing and not just for us; for the cities and Orange County.”

That doesn’t mean the money has been disbursed.

“Being awarded only means you’ve been selected for the project to be funded,” Smith said. “You get your money if you follow the rules. You don’t get money in hand until that work is completed and OK’d.”

Some of those funds filter through state agencies that have the final say on what goes where, agencies like the General Land Office, the Texas Department of Emergency Affairs or the Texas Water Development Board.

"A lot of residents get impatient. I think a lot of time it’s based on a lack of understanding these processes,” Smith said. “We are in (county) Commissioners Court so frequently and talking about, ‘Hey, this money is headed our way,’ that residents think it’s been sent, the county is holding it and we’re just sitting on it.

“There’s so much that goes on in the background. Even like a $350,000 grant is like a three-year process between application development, environmental review, the Civil Rights documents, starting the documentation, everything that has to happen along the way before we can ever begin construction.”

And Kunst, Orange’s city manager, reminds that any mistake along the way can send a grant seeker back to square one. Or worse.

“If we get a $5 million award from FEMA to fix roads and we tell a contractor to go do it, if they do something incorrect, FEMA might tell us they’re not going to pay,” Kunst said.

“That’s why the city reaches out to professional grant administrators like Traylor.”

Traylor’s fee reportedly is 5 percent of what the local governments receive in grants. If Orange County entities receive all the $137.3 million funded so far, Traylor’s end would be $6.9 million.

Orange County announced Tuesday it had paid Traylor & Associates $82,350 for its services, not the first check it’s sent Smith’s employer.

“Most of the programs we deal with pay 100% of our fees,” Smith said. “So that goes a long way to free up city staff to do what they need to do and let us come in and help apply for and manage the funds.”

Though her roots and her office are in Northeast Texas, Smith says Orange County and the people she work with here have a special place in her heart.

“We’re definitely seeing a level of coordination between the county and the cities and the other entities that Orange County hasn’t seen in a long time,” she said. “And that’s a big part of it: the willingness and the ability to prioritize projects and understand that we’re all in this together.

“They all work very hard to do whatever has to be done to get the money headed this direction. The officials and the staff down here are fantastic.”