Homeowners get lift with elevation grants 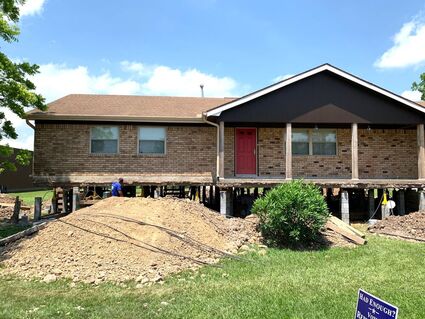 The LeBlanc home in Bridge City sits on piers after it was raised 4 feet by 42 hydraulic jacks 8 inches at a time Friday, May 13, thanks to FEMA grants and the air hoses crisscrossing the yard. The home was flooded by Hurricane Ike in 2008 and again by Hurricane Harvey in 2017.

In 2008, Hurricane Ike and a high tide combined to push 38 inches of storm surge up from the marsh and into Carl and Sherry LeBlanc's Bridge City home.

In 2017, Hurricane Harvey parked itself over Orange County for four days and 13 inches of floodwater again pushed the LeBlancs from the home they built in 1982, where they raised two sons.

Carl LeBlanc was one of the first to sign up after the federal government announced the Hazard Mitigation Grant Program in 2018 to buy out or raise properties with repetitive flood losses.

Two weeks ago, the Feds finally decided how much elevation they would pay for. It was decided to go with "Flood of Record," instead of using the government's Base Flood Elevation (BFE). In the LeBlancs' case, Flood of Record was Ike.

So last Thursday and Friday, as Carl LeBlanc sat watching in the shade of a front yard tree, a dozen workers from Planet Three Elevations placed 42 hydraulic jacks under the 2,200-square foot concrete slab of his home.

Then, over approximately six hours, they raised the twice-rebuilt home, all in one piece, four feet above ground.

They did it eight inches at a time.

"You can hardly tell it's moving, but at the end of the day, it feels pretty good," Carl LeBlanc said between visits with neighbors who dropped by to check the progress.

"I got my flood insurance renewal in the mail and it had gone up from $2,100 to $2,500. But my agent says to turn in my final elevation and see if it will drop my insurance rates.

"Or I might just drop my flood insurance all together."

In between each eight-inch elevation, workers add blocks to build a system of piers that is guaranteed to last 100 years or the lifetime of the house.

Once utilities are reconnected, the foundation will be coated with spray foam insulation. Dirt will be packed around the house, sloping down to the street. A "skirt" wall supported by rebar will be built from the ground to the bottom of the raised foundation.

The LeBlancs, who are raising two grandchildren in their home, should be moved back into their longtime home by the end of the week after taking temporary shelter in a nearby motel.

They are just one of three Orange County families for whom Planet Three Elevations is now doing HMGP elevations. A house around the corner from the LeBlancs was the first to be jacked up and raised five feet. A third, in Orange, is being raised 10 feet by P3.

As many as four other homes have been selected by FEMA, but have not yet finalized the paperwork or financing, said Melinda Smith of Traylor & Associates, grant coordinator for Orange County.

The government has bought out some other frequently flooded homes in Orange County, leaving the former residents to build or move elsewhere.

"I had the choice of a buyout on my application," Carl LeBlanc said. "(But) I'm the kind who likes to keep my money local.

FEMA made an award of $1.5 million, through the Texas Division of Emergency Management, to Orange County in 2019, to elevate a dozen flood-prone properties.

"Part of the delay was because the initial award released by FEMA came the week Tropical Storm Imelda hit," Smith said.

"That's why we don't have as many homeowners under this grant as originally signed up. Some of the homeowners got help from some other programs, or they just left."

Carl LeBlanc said flooding from Imelda reached the edge of his front porch.

"But then the tide would go down and the water would go down. Then do it all over again," he said. "People don't realize how much tides control in this county." 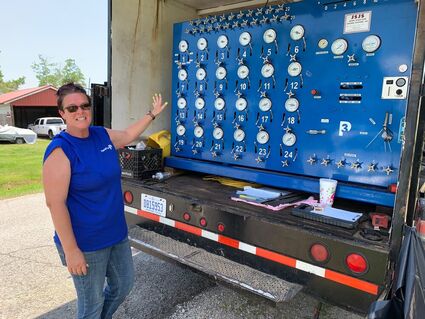 Project Manager Jessica O'Rourke of Planet Three Elevation discusses the Jacking System's 24 valves that can pressurize up to 48 pneumatic jacks to lift a home. The LeBlanc home in Bridge City required 42 jacks under its foundation.

Helping LeBlanc and the others with the long wait for Hurricane Harvey relief was the injection of new money from the State of Texas into the Project.

Under 2019's Senate Bill 7, which created the Texas Infrastructure Resiliency Fund, Smith said about $1 million was set aside and made available to pay a 75-25 split of the local share.

Before the Legislature agreed to pay 75% of the 25% local share for the HMGP program, LeBlanc was on the hook for more than $40,000.

Finally, it took phone calls to U.S. Senator Brian Babin from LeBlanc, Smith and County Judge John Gothia to get the money released.

"We had to get the ball rolling," LeBlanc said.

The finish line is fast approaching.