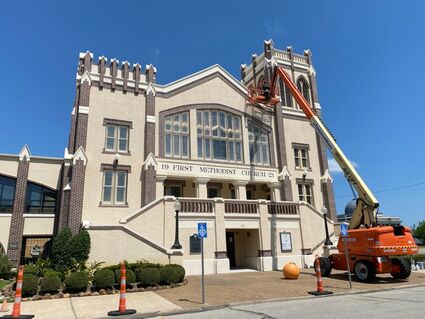 Thomas A Howell, an architect and builder. His work today can be seen on a drive in the Old Orange Historic District when you pass houses he designed and built. His projects include one of the most elaborate construction and designs left standing, First United Methodist Church.

Thomas A. Howell may be the most influential man in Orange that people haven't heard about. No streets are named after him. He hasn't been featured in local history books. However, the Orange High School Tigers in the 1930s played football in Howell Stadium.

Howell was an architect and builder. His work today can be seen on a drive in the Old Orange Historic District when you pass houses he designed and built.

His projects include one of the most elaborate construction and designs left standing, First United Methodist Church with its distinctive gothic architecture.

The church's history online says Howell had been a member of the church since 1903 and was on the board of stewards for numerous years. He was hired to design and build the church in 1919 and it was occupied in 1921 before completion. It was dedicated on June 10, 1923.

For several years, the sanctuary was the largest gathering space in town and high school graduation ceremonies were held there.

Howell was born in Roganville, Texas, on February 28, 1881, and moved with his parents to Orange when he was a youth. His father, Daniel Webster Howell, was a builder and contractor and their family home was at 12th and Pine, a house that stands today and has a Texas Historical Marker.

Thomas Howell went to Texas A&M and learned architecture. He returned to Orange and went into business with his father.

His obituary in the Orange Leader on June 7, 1945, said he had been a builder for many years connected with the Lutcher and Moore Lumber Company.

His father also contracted to the lumber company and in 1910, they worked together to build the house at 612 W.Orange Avenue for T.G.B. Cox, a civil engineer for the lumber company. In 1943, after Daniel Webster Howell's death in 1930, Thomas Howell designed and build the second story of the house.

Judge Jerry and Susan Pennington have restored the house and live there today. It, too, has a state historical marker.

Thomas Howell served a number of years on the Orange City Board of Education, and was president. The high school football stadium was named for him in the 1930s. Orange High School was on 14th Street at Green Avenue at the time.

Thomas Howell married Alice Cheatham of Orange and they had one daughter, Thomasine Howell Carter, who was born in 1910 and died in August 2002. She was a longtime school teacher in Orange and her husband once owned The Tower Restaurant on MacArthur Circle.

Thomas and Alice Howell built their family home next to the railroad tracks at 1207 Park Avenue. Some people may have gone to day care at the house that was later owned by the Green family.

In 1996, it was made into the House of Refuge for the homeless. Thomasine Howell Carter attended the dedication of the House of Refuge and said her father had expanded the house by creating a Mansard roof design that enlarged all four sides of the house. She told the Opportunity Valley News newspaper that a relative had died leaving a widow and young son. The Howells gave them a place to live.

Teenage arsonists burned the house, which was vacant at the time, during a spree during the Fourth of July weekend 2015. Another two-story house in the historic district was destroyed along with a smaller house. 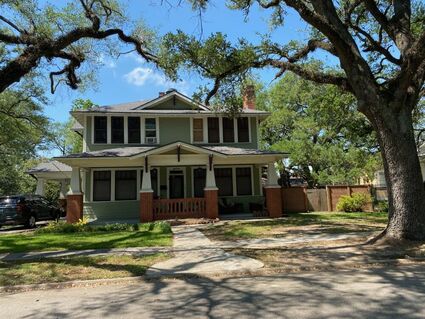 One of the many remaining homes in Orange's Historic District that was designed by Thomas Howell.

Some houses built by Howell are in the Mission style architecture popular in the 1920s. Those houses include 2002 Park Avenue, designed for a physician to the Lutcher and Moore Lumber Company, plus the mission-style red brick Cohenour house on Park at Sixth Street. Another is on Pine Avenue at the corner of Tenth Street.

Howell was also a member of the Orange Rotary Club, the Masonic Lodge, and the Odd Fellows. His obituary said Madison Lodge No. 286 officiated his burial ceremony. He and his wife are buried in Evergreen Cemetery.