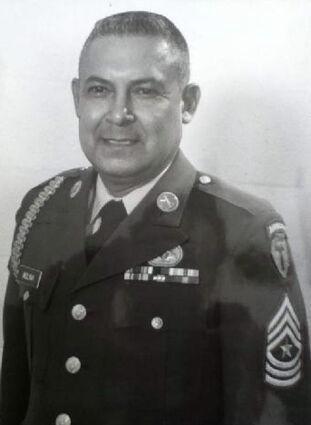 Robert Cardenas Molina was born in Edna, Texas on September 25, 1927. After a lengthy illness, Robert entered

Heaven's gates on May 15, 2022 welcomed by his loving wife of 66 years, Rosey Molina; father and mother,

Robert Molina Sr. and Victoria Molina; his father-in-law and mother-in-law, Onesimo and Cecilia Abrego, and his

A hard-working man, Robert was a dedicated husband, father, and soldier who loved his family and country. Not

only was he a loving husband and father, he was a loving grandfather and great-grandfather. Robert and Rosey had

they could be successful and happy. Robert was a member of the St. Francis of Assisi Catholic Church in Orange.

Upon the urging of his mother and father who wanted him to better himself, Robert enlisted in the United States

Army in December 1945. He received an honorable discharge in August 1947 as Master Sergeant. He enlisted as a

in May 1953. He served proudly as member of the 82 nd Airborne Unit where he grew his passion as a paratrooper.

until his return in 1981. His final transfer was to Camp Mabry in Austin, Texas where he served in the Adjutant

Robert is survived by his son Robert Molina III and his wife Sherry of League City; daughter Mary Ann Turner and

Molina of Jasper and his dog Hunny Bear. He is also survived by numerous grand, great-grand, and great-great

grandchilden and by numerous nieces, nephews and other family.

Pallbearers will be his sons Robert, David, Michael, and Joseph and grandchildren Cole Parish and Christopher

in Orange. A Christian wake and rosary service will be at 10:15 AM. A Catholic funeral mass service celebrating

St. Mary's Catholic Mausoleum in Orange. The services will be livestreamed on the St. Francis of Assisi Church

Facebook website. The link is https://www.facebook.com/st.francis.church.orange . In lieu of flowers, the family is requesting donations be made to the Rosey and Robert Molina Jr. Memorial

and the Wounded Warrior Project.

Robert’s son, David and wife Darlie provided Robert with loving care during the final years of his life. The family

gives them and everyone else who cared for Robert their greatest gratitude, especially the Pelican Bay Assisted

Living Community of Beaumont and the Beaumont Health Care Center.

“Be not afraid. I go before you always. Come follow Me. And I shall give you rest.” (Bob Dufford, S.J., a Catholic