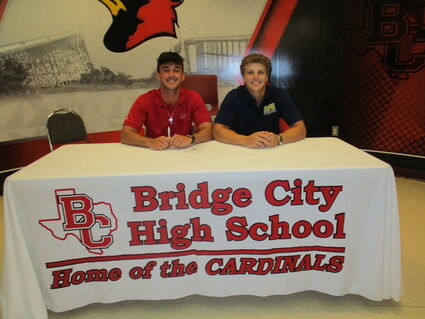 Ethan Oceguera and Deegan King signed letters of intent May 18 to play ball in college. Oceguera will play baseball at Lamar University and King will play football at Howard Payne University

Two Bridge City athletes signed on May 18 to play their sports at the college level next season. Deegan King signed to play football at Howard Payne University and Ethan Oceguera signed with Lamar University to play baseball.

King was a four-year varsity starter at safety for the Bridge City Cardinals football team and was a starter on the Bridge City baseball team as well. King received recognition to the All-District team for football in both his junior and senior seasons at Bridge City.

Athletic Director Cody McGuire praised King for his play in McGuire's first year as the head football coach at Bridge City. "Pretty special for me this being my first head coaching job, and Deegan is my first guy to sign to play in college," McGuire responded.

Oceguera was a four-year letterman on the Cardinals' football and basketball teams while also competing on the track team for three years and the golf team for two years. Oceguera played baseball his freshman year then did not play for two seasons before returning his senior year to play for Bridge City and was named the District MVP having a great year as a pitcher and hitter.

Bridge City baseball coach Chad Landry recounted Oceguera's coming back out for baseball in January 2022 when he needed to borrow a hat and a glove. "I said Ocey you don't have to try out, you're good I promise you. He replied 'I want to do it the right way'. That's just who he is. We're extremely proud of him and all of his accomplishments," Landry exclaimed.

The signing ceremony was conducted in the school library at Bridge City High School.