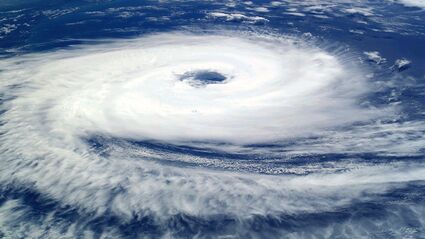 The 2022 hurricane season is starting out with a tropical depression in the Gulf of Mexico, but the good news for a storm-weary Orange County is that the National Weather Service predicts it will affect the Florida coast, rather than Texas or Louisiana.

The NWS in Lake Charles issued the news Tuesday afternoon as the season started on Wednesday. The tropical depression is from the remnants of Hurricane Agatha, which started in the Pacific Ocean and crossed the Yucatan. If the depression forms into a named storm in the gulf, it will be Alex.

The Pacific season began early. Usually, the Atlantic storms affect Southeast Texas and once again, the season is expected to be busier than usual with 14 to 21 named storms. Three to five of those could be major hurricanes of Category 3, 4, or 5.

People here are still making property repairs after several tropical storms and hurricanes in recent years, but they need to remember that storms can kill.

The National Hurricane Center's final report on Hurricane Harvey listed nine "direct" deaths in Orange County. Direct deaths, according the hurricane center, are attributed to drownings, lightning strikes, rip currents, winds, or flying debris. The count did not include two accidental electrocutions, or deaths that could be related to health like heart attacks, and power failures with life-saving equipment.

August will mark the fifth anniversary of Harvey flooding the area. The storm, which hit the southern Texas coast as a hurricane, circled around the state, went into the gulf and came back, was categorized as a tropical storm when it went over the Golden Triangle.

The National Hurricane Service Harvey report included data from the National Weather Service, other scientific sources, FEMA, and other records.

Though Harvey did not bring damaging winds, the rain proved catastrophic. According to the report, rainfall totals are not exact because many of the traditional rain gauges are set for 12 inches, and then someone must empty them to record more. During the storm, the gauges could not be emptied and reset.

Orange County had widespread storm flooding with rainfall totaling from 30 to 50 inches. The worst flooding was reported in Orange, Vidor, Orangefield, Pine Forest, West Orange, Mauriceville, Rose City and Lakeview, according to the data.

"A large portion of Southeast Texas had in excess of three feet of water," the report said.

The Orange County Airport rain gauge recorded 36.47 inches of rain, while the Southeast Texas Regional Airport in Nederland had 47.52 inches.

The Jefferson County Drainage District gauges recorded the tropical storm records for the United States. A gauge in Groves had 60.54 inches and a gauge in Nederland had 60.58 inches.

Newton County had 20 to 40 inches of rain during Harvey and reported 2,000 flooded homes.

FEMA estimates 30,000 water rescues were made during Harvey, but there was no break-down by county. Orange County had hundreds of boat rescues and dozens of rescues by helicopters.

The National Weather Service said people to be prepared for hurricane season. Advice includes creating a communication plan. That plan should have telephone contact numbers available in case a cell phone is lost or dead. Many people today do not have phone numbers memorized and do not know how to reach friends or relatives.

Reports after Harvey had desperate relatives looking for people who were safe, but did not know how to reach them.

Because of the dependency on cell phones and electronic devices, NWS recommends making sure everything is charged in advance. Portable charging devices can be purchased to charge phones, tablets, laptops, lamps, flashlights, and other equipment. The chargers should also be kept charged.

People in hurricane zones should also have an evacuation plan and follow evacuation notices. An emergency kit should be prepared with essential items, including snacks and a change of clothes. Prescription medicines should be kept up-to-date.