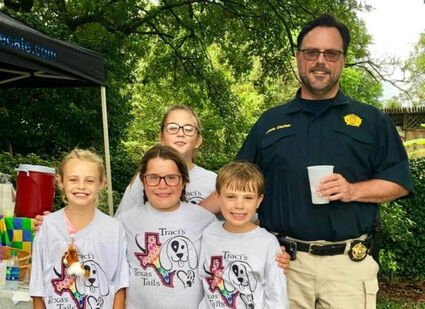 Constable Lannie Claybar with Breelyn, Caroline, Keller and Annabelle in the back.

Peggy Claybar likes to give little lessons to her grandchildren and little ears were listening to the ones about community service. On their own, four of them decided they could bake cookies and lemonade to sell to help rescue dogs.

Now, Annabelle, Caroline, Breelyn, and Keller will hold their Fifth Annual Lemonade Stand on Wednesday, June 1, outside the home of F. David and Peggy Claybar on Pine Avenue at Fifth Street in the Old Orange Historic District. The hours will be 9 a.m. to 2 p.m. They will also be selling handpainted rocks for garden decor.

The grandchildren are Annabelle and Caroline Claybar, the daughters of Melanie and Constable Lannie Claybar. Also, the parents of Keller Claybar and Breelyn LeMaire are David C. and Sabrina Claybar.

Since the first lemonade stand in 2017, the kids have raised a total of about $10,000 for Traci's Texas Tails Rescue. Last year, Father Jim Sichko, a priest who grew up in Orange, matched the $3,000 the children made at the sale making a total of about $6,000.

Grandmother Peggy said the idea for the sale grew from an outing to the Orange Lions Club Charity Carnival.

"The carnival really helped me explain to them about volunteers," she said. She talked to the children about how the carnival operated using local volunteers giving to help the community.

The Claybar family loves dogs, and Peggy has helped Traci James of Orange in her efforts to help dogs. James personally set up a rescue that helps injured and homeless dogs get help and find homes. Through the years she has worked with the city animal control shelters to find permanent homes for dogs. She has raised money to pay for veterinary bills for the dogs, and has found foster homes until the pups can find a forever home.

Peggy said the children were at her house one day and Annabelle, the oldest, saw her writing a check to Traci James to help with veterinary bills. Annabelle asked if they could help, too, and the idea to sell cookies and lemonade outside started.

The kids made the cookies, colored posters, and stirred up the lemonade. At first, they would prepare to give back the change and grew excited when people handed them $10 and $20 bills telling them to "keep the change."

The Covid 19 pandemic in 2020 led to the cancellation of the lemonade stand. Peggy said last year, as people were still cautious about Covid, son David C. said he would bake all the cookies at his cafe so people would know health protocols were being followed.

This year, the cafe will again bake the cookies.

The first lemonade stand was in the summer of 2017 when Annabelle was 9, Caroline and Breelyn were 7, and Keller was 5. This year, Annabelle is 14 and preparing to go the LC-M High School, while the next two girls are 12 and Keller has hit 10.

Peggy said they decided to hold the fundraiser early this year because the grandkids are involved in a lot of activities later.

The lemonade stand is held in the shade of the old live oak trees that grow in the Old Orange Historic District. Grandfather F. David Claybar, who helps supervise, likes to sit outside with them and visit. Having a constable in the family provides a bit of traffic control, if needed.

The sale draws a variety of customers including animal control officers from the cities, firefighters, police officers, and UPS drivers. The crowd grows during the lunch hour with people from the county courthouse and city halls drop in.

Peggy is pleased with the lessons her grandchildren have learned. "If a lot of people get together, they can make a difference," she said.