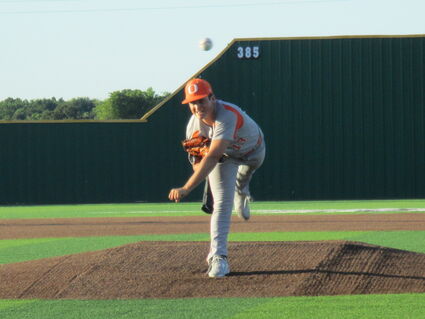 A successful season came to an end last week for the Orangefield Bobcats baseball team. The China Spring Cougars defeated Orangefield in two games at neutral sites to eliminate the Bobcats from the state baseball playoffs in the Region 3 semifinals.

This season was the second in a row for Orangefield to reach the fourth round of the post season. Last year the Bobcats were eliminated by the Rusk Eagles in a one game playoff.

The two opponents Orangefield (28-2-1) and China Spring (28-8) came into this year's regional semifinal series ranked in the top ten in Class 4A. Both teams were repeat district champions with the Bobcats from District 22-A and the Cougars in District 18-4A.

The first game of the series was played Wednesday, May 25, at Navasota High School. China Spring was the designated home team for that game.

Rattler Field is a beautiful complex with symmetrical dimensions in the outfield at 320 feet down both lines and 385 to the deepest points of left and right centerfield. Everyone seemed to like the venue except maybe as it turned out the right fielders for the two teams.

The Bobcats started Coop Longron as their pitcher. Longron came into the contest undefeated on the season winning all three of his starts to that point in the playoffs.

The Cougars called on Kolby Killough to be their pitcher. Killough had started the game against Rusk a week earlier in Round 3 on Saturday and left the game with China Spring losing 4-3 after three innings when weather delayed the finish of the game before the Cougars rallied to win the game 6-5 on Monday a week ago and allowed the Cougars to advance to face Orangefield which swept Livingston in two straight games.

The game started at seven with the sun setting in the west which was behind the third base dugout. In the bottom of the first inning evidence of the difficulty for the right fielders was made clear.

The second China Spring batter hit what appeared to be a fairly routine pop fly to right which apparently was lost in the sun by the Bobcats' right fielder Brennon Lecoq and the ball landed almost untouched in fair territory. The Cougars' hitter Brayden Faulker raced all the way to third on the three-base error with one-out. Cage McCloud followed with a sacrifice fly to left field to give China Spring a 1-0 lead with the earned run.

China Spring threatened again in the second putting two runners on base. Longron registered his first strike out of the game to end the threat with no Cougars scoring and keeping the deficit for Orangefield to overcome at just one run.

Killough kept the Bobcats bats which had been averaging close to nine runs a game in the playoffs fairly quiet for the first two innings. He yielded a single in the first inning by Tyler Shearin and a walk to Lecoq in the second neither of who got past second base.

That changed in the top of the third. Caleb Fregia opened the inning with a single. Kameryn Henderson laid down a bunt which Killough fielded and tried to get the force out on Fregia at second base but the throw was not in time.

Shearin bunted, and it was so well executed the Cougars had no place to throw the ball for a force on any of the three Bobcats. Kyle Michael drove in the first Bobcat runner in Fregia with a single to center and a second Orangefield run scored when the throw in bounced away from the Cougars allowing Henderson to scamper home to give the Bobcats the lead 2-1 with still no outs and two runners on base.

Kolbie Sowell grounded to shortstop for a fielder's choice on Michael at second base but it was a run batted in as Sowell beat the throw to first while Shearin was scoring the third run of the inning for Orangefield. Killough settled down and struck out two Bobcats sandwiched around a walk to Trent Eaves to get out of the inning trailing Orangefield 3-1 going to the bottom of the third.

The Bobcat lead would not last through the next half inning. The top of the Cougar batting order came to the plate as Jase Garrett lined a single over a leaping Fregia at second for a base hit to start a rally.

Faulkner walked on a three-two pitch to put two Cougars on base. Cage McCloud singled to right with Garrett stopping at third and loading the bases for China Spring.

Trace Necessary hit a grounder to the right side which Fregia went far to his left to field to retire the hitter with Garrett scoring to cut the Bobcat lead to one run. China Spring took the lead back 4-3 when the next Cougar batter Bryce Tabor tripled to deep right center field just beyond the grasp of Orangefield centerfielder Henderson to drive home Faulkner and McCloud with the go ahead runs.

Orangefield second baseman Fregia made a good play when he fielded a grounder from JC Hughes the next Cougar to bat and threw to third base. After a bobble by Bobcat third baseman Sowell a tag was made on Tabor, and he was ruled out to keep the score 4-3 in favor of the Cougars.

The setting sun continued to be a problem as the game progressed. The China Spring right fielder Domonic Guerrero dropped two fly balls, unfortunately for Orangefield both times Guerrero was in foul territory and there were no Bobcat base runners as a consequence.

By the fourth inning the sun was sitting on the horizon when the Cougars' Trevor Black hit a line drive to right field. The Bobcats' Lecoq made a great effort but had the ball go off his glove when he went to his knees to make the catch. Black ended up at third base on the play.

Bobcat pitcher Longron induced the next Cougar to hit a comebacker to him which kept Black at third. With the infield in for Orangefield another ground ball kept Black where he was, but the throw to first was dropped by normally sure-fielding Michael for an error.

That play proved costly for the Bobcats as it would have been the second out of the inning. Faulkner then flew out to right field where Lecoq made the catch which should have retired the side but instead was a sacrifice fly scoring Black to give China Spring a 5-3 advantage.

Orangefield threatened in the sixth when Jason Bodin led off with a single, stole second, and went to third as the throw down eluded the Cougar shortstop. Bodin was stranded there as Killough got the Bobcats to hit two popups before registering his ninth strikeout of the game to end the threat.

Down by two runs Henderson was not bunting but hit a grounder to shortstop that resulted in a force out on Fregia at second. Henderson went to second on a grounder to third by Shearin before Michael got his second hit and second RBI of the game to drive in Henderson.

Sowell was the next Bobcat to bat. He hit a dramatic walk-off homerun against Navasota two weeks ago, but no such drama this time as Sowell struck out against Cougar reliever Marcus Rosales to end the game with China Spring winning 5-4 to take a one game lead in the series.

Orangefield Coach Tim Erickson said the Bobcats' performance was uncharacteristic of their play all season long. "We didn't defend tonight. We made way too many errors, and when you're playing good teams they're going to capitalize on it. That was the difference," Erickson evaluated.

The series shifted to Grand Oaks High School of the Conroe school district in Montgomery county for the second game on Thursday and a third game if necessary afterwards. The home of the Grizzlies is another beautiful field with completely synthetic turf in the infield and outfield.

Coach Erickson altered the strategy for Orangefield going into the games on Thursday starting Jason Bodin in Game 2 and saving Trent Eaves for the possible third game. Erickson indicated, "We may mix it up a little bit. We may go Bodin just to see if he can give us a little spark and then we know we're in good shape whenever we get to game three since we've got to win two anyway."

Bodin started on the mound for the Bobcats and walked two Cougars in the first inning. Bodin had his fast ball humming striking out four China Spring batters and holding them scoreless through two innings.

Jason got the Orangefield offense going in the bottom of the second with a lead off double to right field off China Spring starter Cage McCloud. The Cougar right fielder Domonic Guerrero bobbled the ball as he neared the fence before securing it in his glove. The umpire first ruled it was an out, but after a discussion with the other umpires it was determined Guerrero grabbed the ball after it touched the fence so Bodin was credited with a double.

Morgan Sampson flied to right field which allowed Bodin to tag up and go to third with one out. Brennon Lecoq hit a sacrifice fly to center field to drive in Bodin and give the Bobcats a 1-0 lead after two innings.

Cougar Brayden Faulkner was hit by a Bodin pitch with one out in the third. Cage McCloud blasted a long homerun deep into the trees beyond the right field fence that put China Spring ahead 2-1. Bodin escaped further damage by leaving the bases loaded in the inning.

Marcus Rosales came into pitch for China Spring in the third. Kolbie Sowell had been kept in check by Cougar pitching without a hit thus far in the series until he doubled down the right field line to start the Bobcat fourth. Kane Smith courtesy ran for Sowell.

Designated hitter Sampson doubled into the left field corner to score Smith to tie the game 2-2. Lecoq was robbed of a hit by the Cougar first baseman who made a diving stop to retire Lecoq at first as Brayden Babin for whom Sampson was hitting came in as a runner and advanced to third. A passed ball allowed Babin to score the go ahead run for the Bobcats.

The one-run lead for Orangefield lasted into the sixth. Eaves relieved Bodin as the Bobcat pitcher after the first three Cougar batters reached base. Three doubles all to right field and two Bobcat errors resulted in three Cougars scoring to give China Spring a 5-3 advantage.

Two runs were added in the seventh by the Cougars to give them a 7-3 lead before Orangefield came to bat in the bottom half of the inning. Cougar pitcher Rosales finished strong retiring the Bobcats in order on three ground outs to cap the victory and secure the sweep for China Spring in the series. 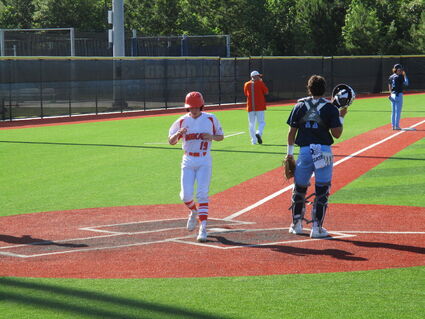 The Bobcats shed some tears as they meet with Coach Erickson after the game. "These guys set high expectations for themselves, had a goal of making it to the state tournament in Austin, and just fell a little bit short. Of course they're disappointed, we all are, but I want to focus on the things they have accomplished this year especially these seniors they've had a hell of a run these last four years. I couldn't be more proud of them the way they represented our program, the way they lead on the field, the way they lead off the field. I think in that aspect we'll miss them more than anything else and there's a lot of talent walking off that field," Erickson concluded.