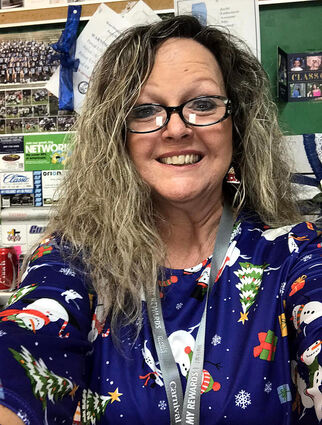 Orange native Meri Elen Jacobs, a member of the first West Orange-Stark High class after district consolidation, is retiring this summer after 22 years as WOS teacher and yearbook/newspaper sponsor.

Now she's putting it in the rear-view mirror.

"Being at West Orange-Stark, that was my dream job. Now I just want to spend as much time as I have taking care of my grandkids," Jacobs said last week.

She retired from the school district at the end of May.

A 1981 WOS grad, Jacobs graduated from Lamar University with a degree in secondary education with certification in the teaching fields of English and journalism.

For 18 years, Jacobs was wrote a weekly football column for The Record Newspapers.

For most of her 22 years at WO-S, Jacobs oversaw the production of the campus Mustang Message newspaper and Mustang Memories yearbook.

"We put out 20 yearbooks, and we put out a printed school newspaper before it went to be an online paper," Jacobs recalls.

"Our yearbook sales dwindled to almost nothing, so it was decided 2020 would be our last yearbook."

In the age of social media, with most teenagers flooding the Internet with photos of themselves and classmates, yearbooks were bound to seem obsolete.

Jacobs said she wrote for the college newspaper at Lamar University and said she enjoyed writing features the most.

"I loved to write but I loved to do what I wanted to do," she said. "I like to write about people I know, and get to learn more about them."

But times have changed, she admits.

"The journalism textbook we use – the one we had a year before I started – doesn't even have digital photography in it," she said. "When I started with the yearbook and newspaper, we did everything on paper.

"Now it's all on computer."

Jacobs has learned digital publishing and done her best to pass it on to her students.

"The kids who sign up for Journalism 1, they don't realize there's writing in journalism. Most of what's written in our school newspaper is just a couple of lines and a lot of pictures.

The WOS journalism teaching job first appealed to Jacobs as a student at WOS.

"When I got out of high school, I could see myself teaching journalism, always in that classroom where I fell in love with it," she said.

Sports championships rank high among the stories she remembers her students covering for the yearbook and newspaper.

"The state championships are at the top of the list, and probably the state track championships," she said. "They were so different from football, but I loved that.

"Because the teams were smaller, it was more intimate."

The story she regrets having to cover was the death of Mustang quarterback Reggie Garrett, who in 2010 collapsed and died of an unknown heart ailment moments after throwing a touchdown pass.

"That was the hardest story to cover," Jacobs recalls. 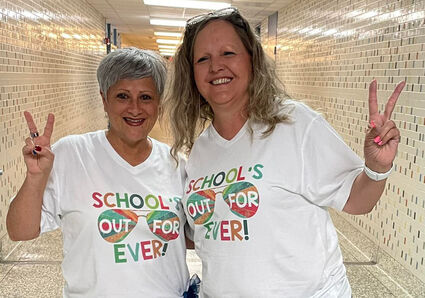 "I was trying to heal, too. I was living on the same emotions on which the kids were living. Our yearbook was focused on that.

"When we finished the yearbook, I said, 'This is so sad,' and one of my kids said, 'but our year was sad.'"

Despite saying, "I love teaching," Jacobs says it's time to write –30-  (an old proofreader notation to point out the end of a newspaper story) on her teaching career.

"I've taught classmates' kids, and now it's their grandkids. I've taught 20 or so kids of the kids I had when I first started teaching at WOS," she said.

"I feel like I've missed a lot covering other people's kids. I have five grandkids and another on the way and now I'm going to spend my time going to their stuff."