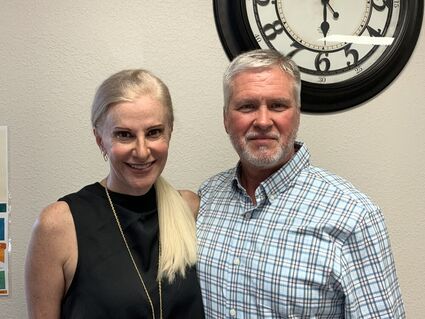 Troy Pierce, right, with wife Maria, is Pinehurst's newly appointed council member, saying it's time for him to give back to the community that raised him.

It’s time for the Pinehurst City Council to renegotiate its deal with the people they pay to engrave the nameplates in front of the members’ seats in the council chambers.

The little city within a city should get a quantity discount, having seen seemingly constant turnover at the front of the room.

Three elderly mayors in a row retired early only to be replaced by another council member. The six-member council can’t seem to fill one vacancy before another seat opens up.

Such was the case this week.

On Monday, Troy Pierce, a nearly lifetime Pinehurst resident, was appointed by council to fill the final 11 months of a two-year term in the council seat formally held by Sarah McClendon.

That office was open for six months after T.W. Permenter retired from public service in December 2021.

One council member who did not attend Monday’s 8 a.m. “Special Meeting” to fill McClendon’s seat was Asevedo.

Turns out he was busy drafting his council resignation letter, which he turned in Tuesday.

“We’ll just have to do it again,” McClendon said of appointing a mid-term replacement.

Asevedo, a pastor at Destiny Church, said he has moved out of town after an inspection of his Pinehurst home deemed the structure unsafe.

“Water was pooling under our house and an inspection of our foundation determined the main support beam for our pier-and-beam house was broken in half,” Asevedo said.

“We tried our hardest to find a four-bedroom home in Pinehurst. We looked and looked.”

The new mayor hates to see Asevedo leave the city.

“It’s unfortunate. We’re going to miss him,” she said, “but he’ll do good, no matter where he goes.”

Asevedo said he’s not going to fade away from the local scene.

“I’m still going to be doing what I do,” he said. “Besides working in my pastoral role, we’ve got a few good things about to kick off.”

Pierce is the water production superintendent for the City of Beaumont. He has lived in Pinehurst for 42 years.

His first run for elected office came in 2020, when he ran for mayor against incumbent Dan Mohon and lost. A year ago, he finished fourth in a five-way race for three at-large council spots.

“I just want to be a part of my community that I grew up in, that I owe so much,” Pierce said. “Growing up here has shaped who I came to be.

"Generally speaking, a lot of people just don't have time to be involved in city government. I've been that way for years, but I think I'm at the point when I need to devote some time to that."