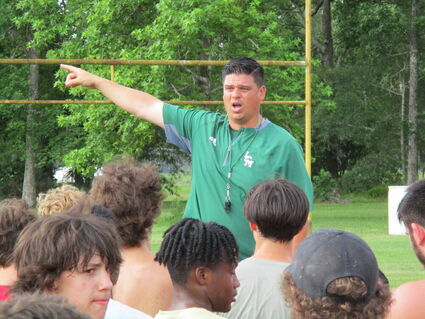 School is out for summer or at least it is for most students. Local high school athletes are working to get in shape for their teams when their seasons start in a couple of months.

Coaches and players are working out at high schools in Orange County in preparation for when schools reopen in August. The University Interscholastic League (UIL) which oversees extracurricular activities in the state of Texas allows schools to open their facilities to the athletes during the summer months for certain activities.

Little Cypress-Mauriceville Athletic Director and Head Football Coach Eric Peevey described the summer workouts as organized chaos with a little over 400 kids coming to work out. "There's a ton of kids out here, and every day we're adjusting the times because we're having more and more show up each day," Peevey indicated.

Seventh, eighth, and ninth graders start each morning at eight o'clock running followed by weight lifting at nine. As the day progresses older student athletes come in to work with the weights and do various agility drills outside.

A handicap for the coaches working with the student athletes the next couple of months in preparation for the football season is Battlin' Bear Stadium is unavailable. The Little Cypress-Mauriceville Consolidated Independent School District is putting in artificial turf at the football stadium, but bulldozers and excavators have the ground torn up making it not suitable for any kind of running around.

Coach Peevey insisted that Battlin' Bear Stadium will be ready with the new synthetic turf by the start of the football season in August. In the meantime outdoor workouts will be done on the practice field beyond the outfield fences of the Don Gibbens baseball field.

The workouts are not limited to just the young men seeking to make the football team. Athletes from other sports are included in the workouts. Those students get to do their skill activities for baseball, basketball, or other sports for an hour each week as well.

The program does not exclude girl athletes. The girl workouts are separated from the boys' time in the gym, but the girls get their opportunity on the weights and in the gym.

Bridge City started its summer workouts on Monday, July 6, with 65 high school boys from ninth to twelfth grade coming out. Over sixty boys from the junior high grades also showed up. Cody McGuire the Athletic Director and Head Football Coach for the Cardinals said it was a great turnout for the first day.

The number of girls participating was limited to twenty-five because there was a volleyball camp also going on. Some of the members of the district champion Lady Cardinals softball team were playing tournaments elsewhere and could not attend the workouts.

Coach McGuire has stated conditioning is a primary goal and an important philosophy for his football program. "We run and lift for about an hour and a half. We do forty minutes of conditioning, and we do forty minutes of lifting, and we do a ten-minute warmup on Monday through Thursday," McGuire described. Two days are for upper body exercises and the other two days cover lower body workouts the coach added.

McGuire came to Bridge City last year from Austin Westlake a perennial power in Texas high school football. "Everything we do here comes from the program I came from which was very successful so I do believe it will transfer over here," McGuire promised.

Braylen Collins is a starter on the Bridge City football and baseball varsities. Collins believes what Coach McGuire is preaching has helped prepare him for the next season. "We're going to be the most conditioned, toughest, and we're going to fight every Friday night. These workouts are really beneficial," Collins exclaimed.

The goal for the summer workouts is to make all the athletes bigger, faster, and stronger no matter what their sport after the summer conditioning. Coach McGuire predicted, "It's just going to help them when they get into their seasons in the fall and in the spring to continue to be successful and maybe take it to the next step."

The Bridge City girls have been successful in volleyball, basketball, and softball in recent years. As the school district's athletic director McGuire believes that those teams will continue to play well and is hopeful the football program will get to that same level of high achievement.

Peevey stated the importance of the student athletes participating during the summer workouts. "It's definitely to get them in shape and get them used to the heat, but it's also maintaining what we've gained throughout the offseason. All of our maxes have gone up tremendously, we've gotten stronger, and we want to maintain that but at the same point we want to get used to running with that," Peevey summarized. 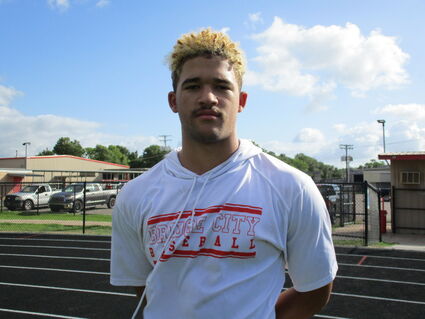 Despite the summer heat the effort from the boys seeking a spot on the Cardinal football team was commendable according to Coach McGuire. "I was pleased with the effort and the attitude that they showed up with. Those kids came out and they got after it. We ran four quarters that was our conditioning and then we had our lifting," McGuire recalled. "They did a great job. These kids are getting stronger every day and it's going to show when we start playing."

Coach Peevey compared the attitude of the students during the workouts with last year when the Little Cypress-Mauriceville Bears football team in his first year as the head coach were co-district champions and advanced to the fourth round of the state playoffs. Peevey emphasized, "You see the same enthusiasm. The kids understand how important it is to come up here. There is no playoff run or success that we have without these summer workouts, and the kids understand that and that's why our numbers are so great right now."

The summer workouts last seven weeks with a week off for the July 4 holiday and a week off for coaching school in July. The workouts conclude July 22 with football workouts to start the first week of August. The 2022 Texas high school football season kicks off around Friday, August 26.