The Krewe de Onyx of Orange has organized a two-day Juneteenth Festival for Saturday and Sunday at the Orange Boat Ramp off Simmons Drive. The event will have lots of live music, food, activities for children, and a community prayer service on Sunday morning.

The lineup fits with the tradition of Juneteenth, which began in Galveston, 100 miles away. Smithsonian Magazine said the news of the 1863 Emancipation Proclamation freeing slaves in confederate states reached Texas through Galveston on June 19, 1865. Freed slaves celebrated and commemorated the day the next year. It grew to be called "Juneteenth" with a celebration of Black achievements.

Texas in 1979 became the first state to make the day a holiday and others followed. Last year, Juneteenth Independence Day, became a federal holiday.

Father Jim Sichko, a graduate of West Orange-Stark High and now a Papal Missionary of Mercy, will give the main address during the prayer service at the Riverside Pavilion. Wayne Sparrow and Anitrea Goodwin will be the MCs and Mayor Larry Spears Jr. will welcome the crowd. Then the Reverend John Jefferson of Mt. Olive Baptist Church will give a prayer and Jayden Miller of the West Orange-Stark High Choir will sing. WO-S Elementary student Justice Marshall will recite a poem and Henry Lowe, founder of the Orange African-American Museum will give a history of Juneteenth before Father Jim.

After the inspirational message from Father Jim, the local honorees will be recognized. Pastor Demetrius Moffet of the Orange Church of God will close with prayer.

Besides the serious business of community prayer, the Juneteenth Festival will feature a variety of entertainers. Gates will open at 10 a.m. both days. 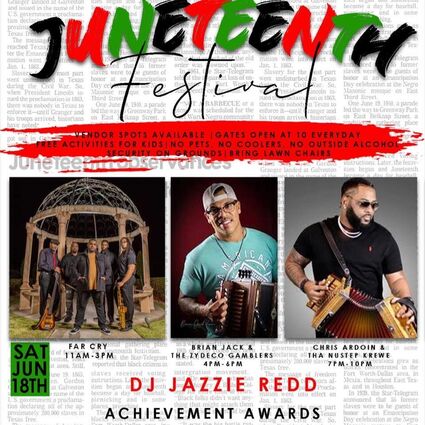 No outside alcohol, coolers, or pets will be allowed. People attending are invited to bring lawn chairs.