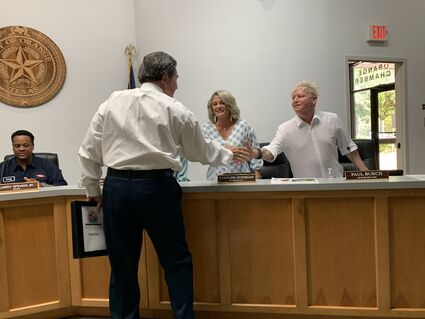 Jim Wolf, Orange's Public Works Director for almost a quarter of a century, shakes hands with city council members Caroline Hennigan and Paul Burch after he announced his retirement Tuesday.

"Sometimes it's time," he said. "I've been here 23 years and it's been an honor to serve the citizens of Orange."  Wolf celebrated his 75th birthday last week.

Historical architect Dohn LaBiche provided the numbers and a rough plan on how the old city hall, the former home of Orange civic pioneer Edgar Brown Jr., can be turned into a visitors center and host as many as five mini-museums.

First-floor walls set up to host city services would come down and leave room for five different galleries, an ADA-accessible restroom, a museum curator's office and staff area.

"The city can still use the rooms upstairs," said LaBiche.

"The things we're going to be doing are very nice," LaBiche said. "It won't be a Cadillac but it will be a very nice Chevrolet."

Council members voted unanimously to go ahead with the renovation.

"This opens up the door to other things that could possibly come to Orange," council member Terrie Salter said.

"I think we get after it as quickly as you can," council member David Bailey told Kunst.

The money to fund the project would come from the 7% tax the city collects for each traveler's night in one of Orange's hotels and motels.

Last fall, the city handed out $185,000 in grants to non-profits, including $50,000 each to Lutcher Theater and the Greater Orange Area Chamber of Commerce and $35,000 to the organizers of this year's Juneteenth festivities, the Krewe de Onyx.

It is accepting applications for the next group of awards. Any 501(c) organization in the city of Orange that attracts visitors to the city can submit application.

Grant money can only be used to promote tourism and the convention and hotel industry. Applcations will be accepted through 5 p.m. July 15. Funds applied for must be for activities between Oct. 1, 2022 and Sept. 30, 2023.

Kunst said he wants the city to use more of its HOT funds to promote city events or event-hosting venues; a $500,000 city hall renovation is just the beginning.

He mentioned a need to improve drainage around Riverside Pavilion and increase street lighting on Simmons Drive and add additional parking for the park at the Orange Boat Ramp that has hosted concerts and Bassmaster Elite fishing tournaments.

"These are the kind of improvements we're looking for," he said. "Also, as times goes by, I want to spend funds on signage throughout the city to direct people to these events.

"We're trying to improve the city's support of city events."

"I think you have our full support on these ideas," he said.

Public Works projects paid for by the city topped Wolf's list, then those coming with significant help from ARPA and HGMP federal grants.

He mentioned the new $3.1 million Orange Recreation Center, built on the footprint of the razed City Natatorium, should open in August.

The rest of the top 10 list of city works projects included Phase 1 of the West Side Water Line; a Phase 3 clean-out of Cooper's Gully is complete; completion of the Eagle Point Parkway in a month; a year's delay to the Sunset Waterline project; the City Hall project with LaBiche; repairing a cave-in on Burton Street and blowers for the Wastewater Treatment Plant should wrap up this month; and the completion in August of tennis court resurfacing and the playground at Brownwood.

Five million dollars worth of projects paid for by the city's $8 million in grants from the American Recovery Plan Act have been awarded. The most expensive are the Meeks Water Tank ($1.2 million), the Greenway Stormwater project ($888,000) and a third project for lift stations at 11th & Burton Streets, Jackson Street and Simmons Drive ($770,000).

Another $5 million coming from the Hazard Mitigation Grant Program is slated to be spent on seven projects, the biggest among them $1.5 million for Hi-Ho Tally Ho subdivision drainage and $1 million for Hillbrook Ditch drainage.

Wolf wrapped up his talk by saying the city was working with Chevron-Phillips Chemical to provide water and sewer to their site near the County Airport, a service that could provide a windfall for city coffers.

It was clear council members wanted to keep working with Wolf, who will be leaving at the end of the month.

"Mr. Wolf, council slept better at night because of you," council member Brad Childs said. "During (Hurricane) Harvey, Beaumont lost their water pressure and had to close their hospitals. You had the City of Orange up and running."

Spears, the mayor, talked about Wolf's work behind the scenes, "getting called at 2 a.m. because a sewer line collapsed. He's out there in the middle of the night, but he's also securing the possibility of infrastructure. 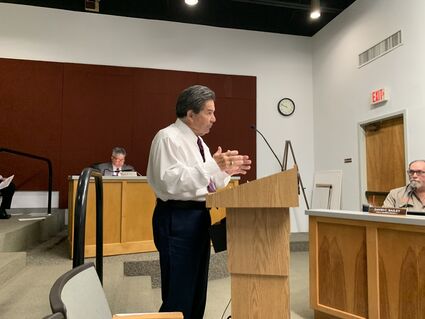 "We're able to grow because this gentleman has made it to where we're able to do that. That doesn't come from the mayor or council or city manager. Someone's got to lay the foundation that makes the city able to grow, and you've done that. So, thank you."