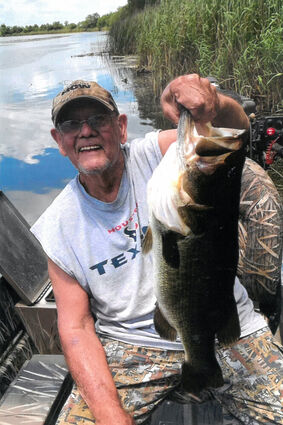 Funeral services will be held at 3:00 p.m., Thursday, June 16, 2022, at Claybar Funeral Home in Bridge City. Officiating will be Deacon Steve Obernuefemann of St. Henry Catholic Church. Burial will follow at Hillcrest Memorial Gardens in Orange.

Visitation will be held prior to the service, beginning at 1:30 p.m., with a recitation of the Rosary at 2:30 p.m., at Claybar Funeral Home in Bridge City.

Born in Sulphur, Louisiana, on July 19, 1938, he was the son of George Aucoin and Lena (Gallett) Aucoin. Sandy attended school at Bishop Byrne High School in Port Arthur, where he played football. Upon graduating from high school, he proudly served his country in the United States Marine Corps. Sandy went on to serve the community as a police officer for the city of Port Arthur, and later worked as an electrician and operations supervisor for PD Glycol in Beaumont, where he retired after many years. He also worked as an inspector for the city of Bridge City.

Sandy had a love for hunting and fishing. He shared that love of being an outdoorsman with his children and grandchildren, teaching them how to hunt and fish. He was a handy-man and jack of all trades who enjoyed carpentry, building homes, and repairing anything that could be fixed. Sandy also had a passion for antique cars, his pride and joy being his 1955 Ford Thunderbird.

He adored his wife, children, grandchildren, and great-grandchildren. Their favorite memories that they made as a family were from their get togethers and traveling. Above all else, Sandy was a man of great faith. He was a devoted member of St. Henry Catholic Church and was also a member of the Knights of Columbus. Sandy will be missed by all who knew and loved him.

He is preceded in death by his beloved wife of over 50 years, Barbara (Bell) Aucoin; his parents; and his siblings, Irvin Aucoin and Victoria (Aucoin) Gibson.