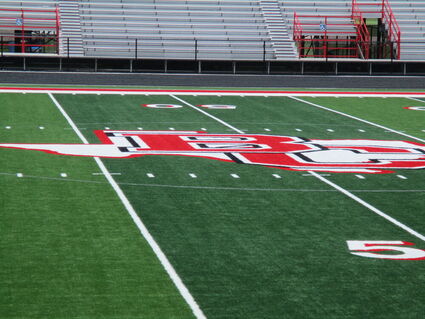 Two more local high school football teams will be playing their home games on artificial turf this upcoming season. The Bridge City Cardinals and the Little Cypress-Mauriceville Bears will have upgrades to their fields completed before the season starts.

H. N. Litton Field at Larry Ward Stadium in Bridge City had its new Matrix Turf with Helix installed near the conclusion of the recent high school baseball season. Workouts for the Cardinals football team and other athletes have been held on the new turf this summer.

Hellas Construction produces the popular synthetic surface which is also used by the Dallas Cowboys and the Houston Texans on their playing fields at AT&T Stadium and NRG Stadium. Coach McGuire commented, "Hellas did a great job and they're a first class organization so our field is first class. We're really excited about it, the kids are excited about it, and other kids from other communities are coming over here getting on our turf because everybody in the area is excited about it."

The Cardinals are pumped about their new playing field and McGuire believes it will benefit the Bridge City football team this year tremendously. "The kids are excited to play on it. We're not going to have to fight ants and everything else when it rains, and we'll be able to practice in the rain. It's definitely going to benefit our football program," McGuire pointed out.

The Bridge Independent School District's Board of Trustees allotted over $3 million for the installation of the Matrix Turf at Larry Ward Stadium and other upgrades done for athletic facilities in the district according to McGuire. A beautiful new video scoreboard has been erected at the stadium to enhance the viewing of the Cardinals' home games.

Holly Fregia the Chief Financial Officer for the Little Cypress-Mauriceville Consolidated Independent School District indicated the costs for the new turf on the football field, a new track, and new tennis courts at LCM High School were bid together. Hellas was the vendor awarded the contract in a total amount of $3,892,461.

Work is in progress on the new field for Battlin' Bear Stadium at Little Cypress-Mauriceville. Tractors and backhoes have been excavating the ground to prepare it for eventually laying the new synthetic turf there.

By the second week of June it appeared Battlin' Bear Stadium might be ready for running an obstacle course but not much else. Little Cypress-Mauriceville Athletic Director and Head Football Coach Eric Peevey said that will change in the next couple of months before the high school football season begins. "It's going to be ready, it's going to definitely be ready," Peevey insisted.

Coach Peevey shared his anticipation for the addition to the Bears' football field. "We're excited about it. They're getting at first all the destruction part done everything torn off the field, the grass off the field now. There's a lot of excitement around the community right now," Peevey expressed. "Every day it seems like something else is getting ripped up, but I'm happy to see the progress."

The new field at Battlin' Bear Stadium will be tremendous Coach Peevey emphasized. "It gives us a place every day to practice on that's actually a full sized field, and we don't have to worry about little things like mud, rain, ants, and missing practice time. That's what hurt us last year, we had multiple days last year where we missed practice because we couldn't get on the field and we had to go to the gym. The gym is good for talking a little bit, but at the same point it's not good for really getting a full practice in," Peevey explained.

The LCM Bear football program under Coach Peevey emphasized speed last year when the Bears were co-district champions and that will be enhanced with the new turf in the upcoming season. Peevey analyzed, "I definitely think the traction of the turf is going to help us especially with our agility and speed."

Only F. L. McClain Stadium at Orangefield High School will have grass on the field when the football season kicks off in August. Orangefield Athletic Director and Head Football Coach Josh Smalley said there has been some talk about switching to artificial turf for the Bobcats' playing field but added he knows of no action having been taken in that direction by the trustees with the Orangefield Independent School District.

A new track was added to Larry Ward Stadium and the same will be done later when the renovations at Battlin' Bear Stadium are completed. The improved tracks will bolster the track programs for both schools.

McGuire as the athletic director is confident the new playing field and track at Larry Ward Stadium will improve not just the football and track teams but the whole athletic department in Bridge City. "When teams are in their off seasons like basketball will be out there on the track, girls basketball, softball, baseball everybody will be able to use it. Soccer is going to be fired up. Last year they had to play all their home games away. It's definitely going to benefit all programs," McGuire concluded.

Tennis is also getting a boost at Bridge City and Little Cypress-Mauriceville. Four new tennis courts have been completed as part of the $3 million upgrade of facilities carried out by the Bridge City school trustees.

Randall Robertson the tennis coach at Bridge City said it was very difficult to practice on the old courts because of the state of the facilities. "There were overgrown weeds and several cracks on all four courts. This was obviously a hazard for the kids as it was dangerous to go 'full speed' not knowing when you may or may not trip on a crack or loose gravel. Also, the balls would hit the cracks often, which caused the ball to take a wild spin or die on the spot, not very realistic for practicing tennis. We often had to put in a work order to weed eat the courts," Robertson described.

The new courts became available towards the end of last season and the end of the school year. Robertson said the new tennis courts are amazing and the kids got to enjoy them.

Robertson is very grateful. "We are very thankful we do not have to travel to Orangefield just to practice tennis. We are very thankful to everyone who played a part in getting the new courts including Dr. Kelly, Coach McGuire, and the school board," Robertson applauded.

The new tennis courts at LCM High School will be located in Bear Park in front of Battlin' Bear Stadium. Trees have been cut down and removed to make room for the construction of the facility to begin there. 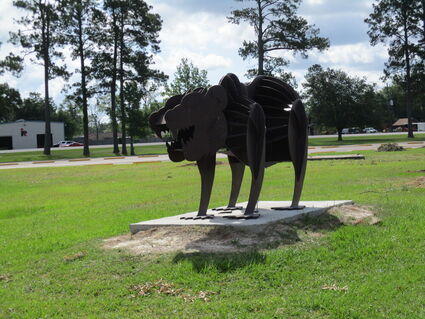 Fregia said the almost $3.9 million contract with Hellas has other items in it. "This total includes various alternate options that the district elected to receive and includes additional add on items that are also included in this total. These items were all negotiated between the vendor and the district to be included in our total price," Fregia added.