Gulf Coast homeowners are getting hammered this year when renewing their property and casualty insurance and the Bridge City school district is no different.

Insurance carriers are socking it to their customers in the areas hard-hit by hurricanes and tropical storms in recent years.

After watching its property insurance bill practically double from $418,000 in 2019 to $820,000 in 2022, the district’s board members held their noses and signed off on a bill of $1 million, 87 thousand dollars for the upcoming school year at Monday night’s meeting.

That’s a sky-rocketing increase of 260% over four years.

“It’s been a very frustrating time trying to find insurance,” Melinda James, the district’s business manager, reported to board members.

“Our location is dictating what they’ll provide for us. Basically, what they’re doing is putting the risk from the insurance company on FEMA or somebody else that will come in during a storm.

“You know we just got our final FEMA check for (Hurricane) Ike last year.”

Kelly said the district had no choice but to accept the $1 million-plus rate, since the 2022 policy expires June 30. But the second-year Cardinal education boss said he’ll look for help from state and national officials.

“I’ve got a draft of a letter and an email I’m working on that will go to our senators, our representatives. Property taxes in the coastal region are out of control and we need to let them know.”

He asked the district’s board members, school leaders and all others at the Monday meeting to contact their elected officials.

Bridge City is unique among Orange County school districts, James said, because its insurance year runs from July through June. Other schools don’t renew until September, she said.

That means it’s too soon for group problem-solving with neighboring districts that haven’t yet been confronted with the problems.

“We submitted our renewal to 27 firms,” Kelly said. “It took 12 carriers to piece together our best bid.”

The 2021 policy for $652,000 was written so that BCISD had to pay no more than half a million dollars of its own money in case of storm damage.

But the 2023 policy has a maximum $2.6 million out-of-pocket cost by the school district. Worse: it will only pay out a maximum of $50 million.

“Fifty million dollars won’t even pay to replace one of our school buildings,” Mark Anderson, board member, said. “If we have a major storm, we risk losing more than one building.”

James, the business manager, said she had run the numbers on many alternatives, but none worked.

“We can’t afford that,” Kelly said.

Likewise, board members agreed with Kelly that the district could not afford to offer an extra 10% Local Option Homestead Exemption that was passed in May’s constitutional amendment election.

The measure allows districts to offer an optional $10,000 reduction in home values for disabled or 65-and-over homeowners.

Superintendent Kelly pointed out that the same election had mandated all school districts raise their homestead exemption from 25% to 40%.

Also, he said BCISD already gives a $10,000 value reduction to the disabled or 65-and-over homeowners, the only district in the county to do so.

“That’s money we use to help us pay our teachers and stay competitive,” Kelly said.

In other action Monday, the school board chose G&G Construction, a family-owned, locally-based company with 35 years of experience, to be construction manager for the Middle School and CTE Building projects approved by voters in May.

G&G President Colin Garrett, accompanied at the meeting by his wife, G&G CEO Natasha Garrett, joined Claycomb Associates Architect’s Richard Crump and Will Clayton to explain their plans for the $72.4 million bond projects. 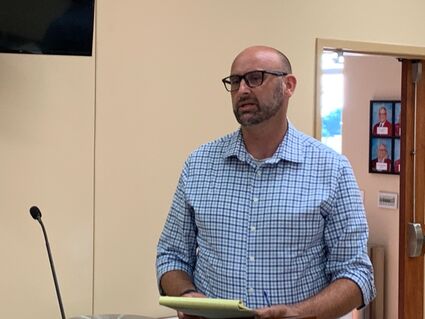 The architects and Colin Garrett said they would work together to avoid choosing hard-to-get materials. Of course, supply chain delays are affecting all construction.

Garrett said he would tailor his construction schedules around acquisitions, warehousing materials until he had everything he needed to begin a particular phase of the building.

G&G is also the contractor for BCISD’s elementary school expansion, which is taking place during summer and other school breaks.

“What we’re focusing on is making sure we don’t overcommit the suppliers and run into the risk that we’re only partially ready for students to start the next school year,” Garrett said.

“So we are only taking under our control what we know we can do.”