Local motorcycle group to hold 500 for Life Rally on Saturday 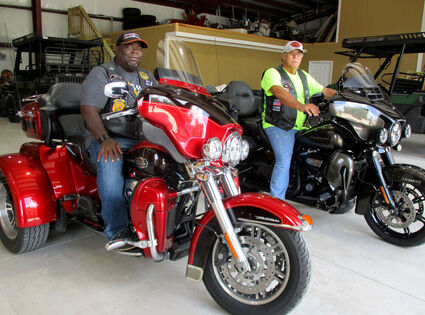 Van Jordan and J. W. Dalton are with Cowboy H.O.G. Chapter 4974 and encourage support of 500 for Life

Van Jordan the director for Cowboy H.O.G. Chapter 4974 of the Golden Triangle came up with the idea of 500 for Life. "We're trying to bring awareness to everybody that's here in the Golden Triangle and the United States about watching out for motorcycles because even though we're a little entity on the road we're a big part of the road because we ride not just every other day, we ride every day, 365, the whole year round," Jordan emphasized.

Harley Owners Group or H.O.G. are motorcyclists working to spread the word of caution to motorists driving automobiles for them to be aware of motorcycles to help save lives. They recommend the slogan adopted years ago by the Texas Department of Transportation (TxDOT) in its annual campaign "Share the Road: Look Twice for Motorcycles" which calls attention to the safety precautions motorists must take to protect motorcyclists.

Jordan said the various H.O.G. chapters are partners with M.A.D.D., Mothers Against Drunk Drivers, and TxDOT to promote safety for motorcycles. The bottom line Jordan pointed out is there are too many deaths involving motorcycle accidents in Texas and in the nation.

State officials report that 519 motorcycle riders died in motor vehicle crashes in 2021. That total represents a seven percent increase over the previous year. Even though motorcycles comprise less than 2 percent of vehicles on Texas roadways, accidents involving motorcycles accounted for 12 percent of the fatalities in 2021.

The reality of the danger facing motorcyclists on the road from other vehicles has been made evident locally already this year with eight fatal accidents involving riders in the Golden Triangle. Three of the fatalities were members of Cowboy H.O.G. Chapter 4974.

Back on December 30, 2021 in Beaumont, Van Jordan's nephew Corey Stinnett, age 33, while riding his motorcycle to work was struck by a vehicle and killed. His family constructed a memorial to Corey with his motorcycle on a trailer and a plaque with the reminder Look Twice.....Save a Life.

The hope of the Stinnett family and Cowboy H.O.G. Chapter 4974 is to take the rolling memorial for Corey to different locations to share Corey's story and the impact his life had. "We feel like if it could just save one life, at that point it's been worth it, and we're hoping it will save many more to bring awareness to the real life tribute to Corey," J. W. Dalton with the local H.O.G. chapter stated.

Less than five months after Stinnett's death Wayne Prosperie of Mauriceville was killed on May 14. Prosperie was hit by a vehicle while on his motorcycle in Port Arthur.

The third fatal accident occurred near Bridge City less than a week later. William Wantuck was killed when he was riding his motorcycle to work on the morning of May 19, and he crashed with a Dodge SUV that cut in front of him on State Highway 87. The driver of the SUV also died later in the hospital.

Sandra Womack is the treasurer for Cowboy H.O.G. Chapter 4974. She has been riding motorcycles since 1999. "As the years have gone on I've noticed more people do not pay attention because they're either on their phone, they're talking to people in the car, they may be eating food, and just not paying attention," Womack observed.

The goal of 500 for Life is to bring awareness to the public of the vulnerability of motorcyclists on the road. Womack commented, "Motorcycle riders are everywhere and more and more people are now starting to ride due to the cost of gas for their vehicle so they're riding motorcycles. People just need to pay attention."

When there is a collision involving a motorcycle frequently the driver of the other vehicle responds they did not see the motorcycle. "Drivers should have the habit to look twice, make sure the way is clear, and do what you need to do to avoid hitting motorcyclists," Womack reminded.

Safety classes are offered for motorcycle drivers. Jordan said they are extremely helpful in teaching traffic laws, safe motorcycle driving, and always having an escape route on your motorcycle in the case of an emergency.

Motorcyclists ride on the left side of the roadway in an attempt to be more visible to drivers looking in the side mirrors of their vehicles. "We just want people to be aware we're out there, and don't make us a fatality because we want to get home to our family just like they do," Womack concluded.

The goal is that more than 500 motorcyclists will take part with the 500 for Life motorcycle rally on Saturday, June 25, according to Dalton. "We're striving to get 500 motorcycles or three-wheelers combined to help the awareness as far as safety within our community for motorcycles," Dalton indicated.

Response to the call for support of 500 for Life has been very good. Dalton informed, "The Columbanus dealership in Orange has partnered up, we've got people coming from Baton Rouge, Houston, Lafayette, and several other areas to come ride with us." 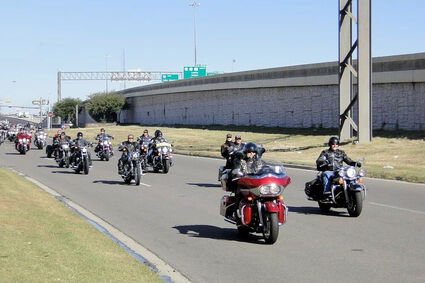 The plan is to ride from Orange to Beaumont joined by various law enforcement agencies. Dalton said the Orange County Sheriff's Office, the Pinehurst Police Department, the Vidor Police Department, Rose City marshals, and the Beaumont Police will take part in the rally by providing escorts.

Those interested in participating in 500 for Life should go to the Community Church on Martin Luther King Jr. Drive in Orange beginning at 8:00 AM on Saturday, June 25, to check in. A meeting for all the riders to receive a blessing will be held at 10:15 AM. Kick stands up will follow at 10:30 AM as the motorcyclists ride to the Cowboy Harley Davidson dealership off Interstate 10 at College Street in Beaumont.

There will be a program featuring special guests at Cowboy Harley when all the motorcyclists arrive there. Motorists in cars and pickups are invited to show their support by following along behind the motorcycles. Jordan reiterated, "Look Twice, Save a Life."