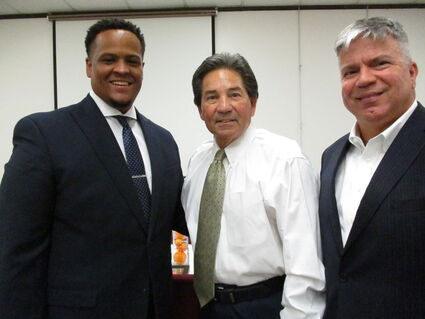 Jim Wolf, center, was thanked for his 23 years of service to the City of Orange by Mayor Larry Spears, Jr. and City Manager Mike Kunst during a reception for Wolf at the Orange Public Library

A reception honoring longtime City of Orange employee Jim Wolf was held Tuesday, June 28, in the Ira Williamson Room of the Orange Public Library. Wolf is stepping down as the Director of Public Works effective June 30.

Wolf has been the head of the Public Works Department for 23 years. Wolf is proud of the projects accomplished for the City of Orange during his time with the city. "Over the years we've been able to take and use grant money to improve water and sewer projects, we've been able to take hurricane related funds to do quite a wide variety of storm water improvements as well as sanitary sewer improvements," Wolf remembered. 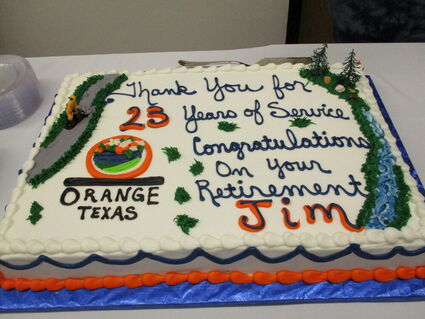 As part of the reception ceremony Wolf was presented with an honorary key to the city. Wolf said his future plans are to take it easy and do work around the house. "I'll keep my hands active in doing some very limited civil engineering consulting work for the City of Orange if that works out," Wolf replied.

City Manager Mike Kunst said with Wolf's retirement being official as of Thursday the Director of Public Works position will transfer to the Assistant Director James Ingram. Kunst indicated the city has already posted the job vacancy.

Kunst explained starting July 1, James Ingram who has been with the city for about a year will step up to the interim Public Works Director. "We'll just kind of go from there. We don't have a timeline on when we will name a replacement for Jim, but we certainly hope to find the right person whether that person is here locally or we have to cast a wider net. Whoever it is, Jim has some huge shoes to fill to meet his quality. We hope to take some time and get a good person." Kunst concluded.