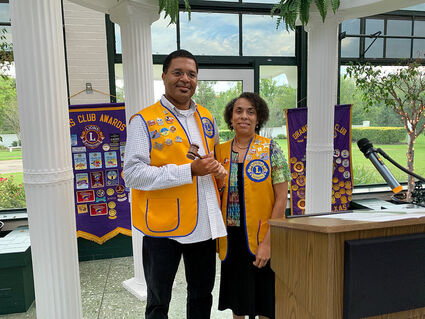 The Orange Lions Club celebrated its history Monday night, then made some more.

Lion Butch Campbell highlighted the club's long tradition of service to the community as he installed a new slate of club officers and directors for the 2022-23 term after dinner at the Brown Center in Pinehurst.

He pointed out the Orange Lions had a special history as the presenters of their annual Lions Club Carnival for almost a century as he reminded that the officers had a defined role in staging the carnival.

Outgoing president Terrie Salter, an Orange City Council member and the first African-American to preside over the Orange Lions, then handed the gavel of leadership over to new club President, Grover Roberts III, who is retired from the U.S. Army.

Roberts is the first African-American man to hold the post.

"My expectation for this year is that we will grow," he said.

"Service is what we do and who we are. We will serve, and like the lions in the wild, we will roar."

Going back to Hurricane Harvey in 2017, Orange County has been hammered by one natural disaster after another, including nearly two years of off-and-on shutdowns caused by COVID-19.

Both weather and pandemic had hindered attendance at the carnival and gathering together for monthly meetings.

But it did not keep the Lions from recruiting new, younger members and holding their most successful carnival in four years.

"This is a much younger group of officers than we've had in a while. They have hair,"

Both Salter and Roberts joined in late 2017, after Hurricane Harvey.

Before turning over the gavel, Salter made a year-end report, handed out gifts to 2021-22 officers and presented a couple of special awards.

"I'm really ecstatic about Grover being the President because I know where his heart is -- to serve the people. We've been serving people in this community long before we joined this club."

Lions Club members took part in several community activities per month and collected impressive donations of $5,000 from DOW, $10,000 from the Stark Foundation in memory of Larry David, and $7,500 in memory of Tony Del Sasso.

Salter presented former Orange County Sheriff Keith Merritt the "Lion of the Year" honor for his service in 2021-22.

"This is the pinnacle of service award we give out to a Lion who has been in the club many years and has served in all fashions. When there is something to be done and I'm talking about the hard and long-hour jobs, this Lion came out every time," Salter said. 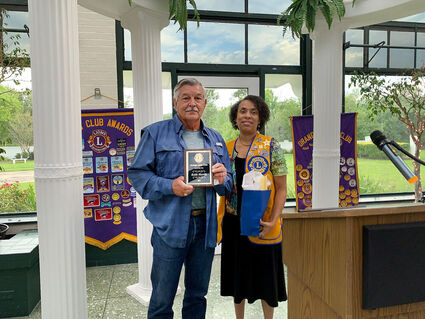 Keith Merritt, left, was recognized as Lion of the Year for 2021-22 by outgoing President Terrie Salter at Monday's meeting of the Orange Lions Club.

"He served the club with pride and passion and is an example for new members as well as the old to follow. To me, that's what this Lion portrays and displays."

Rachel Hannan took home the Rookie of the Year award.

"This Lion stepped into this club and really went to work," Salter said.

Also, Ann Ellis is the new secretary, Chris Kovatch is treasurer, Sandra Williams is communications officer, Stump Weatherford is tail-twister in charge of club morale, and Lois Hughes will be membership secretary for the 27th year.

Hughes has been invaluable in finding assistance for individuals coming to the Lions with need, Campbell said.