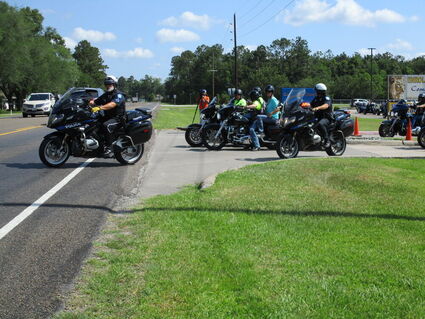 Motorcyclists rallied on Saturday, June 25, for what they hope will be the first of an annual event to promote awareness for motorcycle safety. The 500 for Life rally began in Orange at the Community Church and concluded at the Cowboy Harley-Davidson dealership in Beaumont.

Cowboy Harley-Davidson cosponsored the event with Columbanus Motor Sports of Orange. Keli Borel of Columbanus Motor Sports said 500 for Life is to emphasize motorcycle safety. "Motorcycle riders are one big happy family, and we're part of that family on the Orange end. We feel very strongly about motorcycle safety. We talk about it to our customers, we talk about it to anybody who visits, and we just want help bring awareness to the fact there are motorcycle riders on the road and everybody needs to look twice and see that rider," Borel explained.

Helping promote 500 for Life was the local chapter of Harley Owners Group or H.O.G. in the Golden Triangle. Van Jordan the chapter's director, Tony Nunez the assistant chapter director, and other members like J. W. Dalton at Top Deck worked to organize the rally and get as many motorcyclists as possible to take part in this first time event.

Spreading the word to their fellow riders of the event was a major goal for the organizers. "We had to put it on social media, notify everybody, and use word of mouth starting at the Harley shop, through Columbanus, and Dalton's place to get everything and everybody out here together. Thankful that we've got enough people here to show support for motorcycle safety," Nunez commented.

Each participant in 500 for Life registered and signed a waiver with the organizers on Saturday morning. They were given wrist bands to wear and raffle tickets that were used later at the end of the rally at Cowboy Harley-Davidson to award prizes to the lucky recipients.

Henry Gaus bought his first motorcycle in 1979 shortly after he got his first job. Gaus kept an unofficial count of the riders as they registered on Saturday and believed there were at least 250 signed in during registration in Orange. "We're shooting for five hundred this year. At this point in the game we're close to halfway there, so we probably won't make the five hundred this year, but it'll get there in years to come," Gaus responded.

The term family was used by many of those attending 500 for Life to describe the relationship between fellow motorcyclists. Samantha Jordan is the wife of Van Jordan and a new rider of motorcycles. Samantha shared, "It's about family, friends, and everyone coming together as one who all love motorcycles. I'm just enjoying hanging out with everybody and spending time with my husband and everyone."

Marty Boddie is a pastor at a couple of churches in the Beaumont area and gave a blessing to the group before they departed the Community Church parking lot to head towards Beaumont. Boddie also mentioned the term family in reference to how they feel when one of them is injured. "Our southeast Texas biker community is family, so when one of us gets hurt we all hurt. Unfortunately, we've had way too many motorcyclists killed in the last two or three months so we're trying to bring awareness for motorcycle safety, and of course our heart goes out for families who have lost loved ones to death," Boddie related.

Law enforcement agencies from the Golden Triangle cooperated with the 500 for Life. The Orange County Sheriff's Office had vehicles to help escort the procession of motorcycles leaving the church and riding through the county. Pinehurst, Vidor, and Rose City also provided escorts along the way. The Beaumont Police Department's motorcycle division led the rally as the bikers headed out.

Motorcycle riders came from other communities in Louisiana and Texas to take part in the rally Saturday. Many of the motorcyclists though are members of Cowboy H.O.G. Chapter 4974 based locally.

Chapter 4974 has received special recognition from the Harley-Davidson company located in Milwaukee, Wisconsin, to be part of the company's 120th anniversary in July 2023. "Out of the seven hundred clubs in the United States we've been picked to be the number one club to go out there. We're excited, we want to bring the love, but it's going to take a lot to get there so we're going to start now to get ready for next year," Jordan indicated.

As many members of Chapter 4974 as possible will take part in the anniversary celebration for Harley-Davidson. Jordan expressed , "We're going to ride the Harley-Davidsons all the way to Milwaukee and back. It's going to be a great ride, we're looking forward to it, we've got a year to plan, a year to get ourselves together to get up there but it's an honor to be a special guest of Bill Davidson and Harley-Davidson."

Credit for Cowboy H.O.G. Chapter 4974 being so honored by Harley-Davidson goes to the hard work of Van Jordan, Tony Nunez, and the chapter's treasurer Sandra Womack according to J. W. Dalton. "It's a big statement, out of all the clubs to be the premiere guest at Bill Davidson's request is absolutely over the top," Dalton stated. 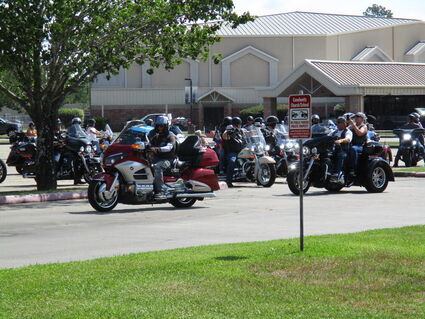 Plans are in the works to prepare for the long ride to the big event and back. "We've just got to make sure of the hotels, the routing, and all because we do plan to ride our bikes up to Milwaukee and of riding them home. We need to plan the trip out," Dalton reminded. "That's not a short trip that's a good trip, a good run, a good ride. I know we have a lot of enthusiasm right now for it, but we'll just have to wait and see, everyone out of the H.O.G. chapter, H.O.G. members, are invited and we want to make sure they participate."