Hitting catches up to stellar pitching for Astros in June 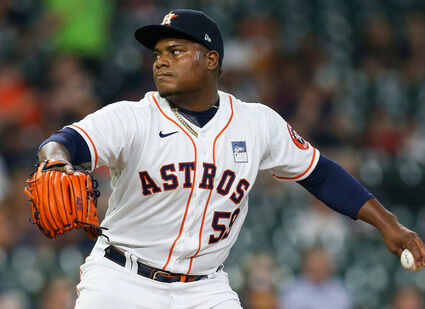 Houston Astros pitcher Framber Valdez had a career-high 13 strikeouts in his six-inning stint, with the team setting a franchise record with 20 strikeouts in a nine-inning game.

I really don't like writing about the same subject two columns in a row, but the Houston Astros left me no choice because of a couple of records they set in the last two weeks and the great month they had in June.

And with the new and improved (?) Spectrum not able to settle their contractual differences with AT&T, those baseball fans in Southeast Texas and Southwestern Louisiana without a dish were also without the Houston Astros. So that's where I come in.

After a very mediocre opening month in April, the Astros pitching staff carried the team in May while the hitters were having trouble with most of their line drives hit right at a defensive fielder and did a majority of their scoring with home runs. One or two homers a game won't feed the Bulldog UNLESS the pitching is superb.

That's exactly what happened as the Astros were winning games 1-0, 2-1. 3-2 etc. thanks to a pitching staff that ranked among the top two in the major leagues.

Manager Dusty Baker wasn't that concerned about the lack of runs Houston was scoring and predicted the hitters would eventually come out of their funk and the run-scoring would improve.

And Baker proved to be correct as the Astros just finished the month of June with a comfortable 12½-game lead in the American League West Division after finally climbing into first place on May 11.

In nine of the 15 games last month in which Houston scored eight or more runs, the Astros were 15-0 in those games. This should be classified as a "hot streak" but actually it is just a "natural correction" as the result of players who had slow starts finding their grooves just as Baker told the baseball writers they would, according to Sunday's Houston Chronicle.

"This is a modern-day baseball team," the article pointed out. "The Astros are hitting only .238, but are 35-4 when they hit more than one home run in a game."

Let's not forget the pitching which has continued to be brilliant and is why the Astros have been the best team in baseball for the last few weeks. The pitching staff has allowed only 27 runs in the last 13 games, a stretch in which they were 11-2 through Sunday's action.

The starters are 8-0 in the last nine games, with Framber Valdez not getting a decision in Sunday's 4-2 win on a walk-off, two-run homer by sensational rookie shortstop Jeremy Pena for a three-game sweep over the faltering LA Angels. It was Pena's fourth hit and second homer of the game and is making Astros fans forget about Carlos Correa very fast.

Valdez had a career-high 13 strikeouts in his six-inning stint, with the team setting a franchise record with 20 strikeouts in a nine-inning game and the help of relievers Hector Neris (2), Rafael Montero (2) and closer Ryan Pressly (3) who was credited with the win thanks to Pena's game-winning home run with two outs in the bottom of the ninth inning.

The team has won six in a row with their only two losses coming at the hands of walk-off hits by Yankees' star Aaron Judge. Since losing 7-0 to the Chicago White Sox June 18, the Astros had not trailed by anything more than one run until Sunday when Valdez put them in a two-run deficit until the team caught up with single runs in the fourth and fifth innings.

Going into Monday's Fourth of July game against the lowly Kansas City Royals, the Astros stood at 51-17, second only to the New York Yankees 58-22 which has the best record in major league baseball. The Yankees had the second-best record (59-21) through Saturday of any team in 93 years. Only the 1998 Yankees (59-20) were better.

Baker, the Astros' Hall of Fame-to be manager, needed only three more wins (2,038) to pass Walter Alston (2,040) and move into ninth place on the all-time wins list for managers.

In more earth-shattering news, it was announced last week that USC and UCLA are leaving the Pac-12 for the Big Ten, which would grow to a monstrous 16 teams and stretch from New Jersey (Rutgers) to Southern California. The Big Ten voted Thursday to add the two schools in 2024 after current media rights contracts with ESPN and Fox expire.

J.T. Poston went wire-to-wire in Sunday's final round of the PGA Tour John Deere Classic for his second PGA win and a spot in the British Open July 14-17 at the St. Andrews Old Course. He started his final round leading by three-strokes and finished with a three-stroke victory. "I can't wait to get to St. Andrews and see what it's like," Poston bubbled after his round.

Ole Miss finished No. 1 in the final Top 25 College Baseball Poll compiled by USA Today sports coaches. Oklahoma was No. 2, followed by Arkansas, Texas A&M and Notre Dame. The Texas Longhorns finished No. 8.

JUST BETWEEN US...Getting back to the topic of the Houston Astros, outfielder/designated hitter Yordan Alvarez was named the American League Player of the Month. Playing in only 23 games in June, the powerful left-handed slugger had a .418 batting average with four doubles, a triple, nine homers, .510 on-base percentage, .835 slugging percentage, 1.346 OPS and 28 RBIs. He walked 13 times and struck out 13 times and for the month he led the league in batting average, on-base percentage, slugging percentage, OPS and RBIs. His home run tally tied for fourth in the American League.