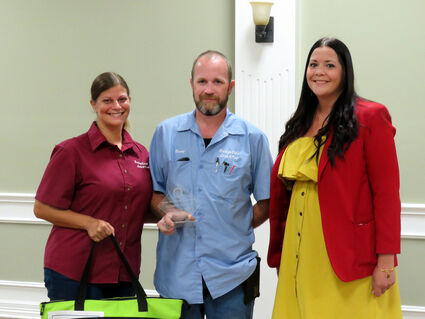 The Bridge City Chamber of Commerce announced that Bridge City Lock and Key has been named Business of the Month for July 2022. Brady Garrett was presented the award, sponsored by Energy Country Ford, by Ambassador Rani Dillow at the July Networking Coffee hosted by Boren Construction.

They have been a member or our chamber since 2010. Recently they saved us. While we were preparing for our Designer Purse Bingo event, the keys to our storage building were accidentally locked in the building. We were panicked because everything we needed for our event was in the storage building and we needed access quickly! We called Bridge City Lock and Key and they were there within 10 minutes and had us in the storage unit within 30 minutes I believe. We were so very grateful for their quick and friendly service! We also greatly appreciate their continued support

of our chamber! Thank you so much for all that you do for our community.