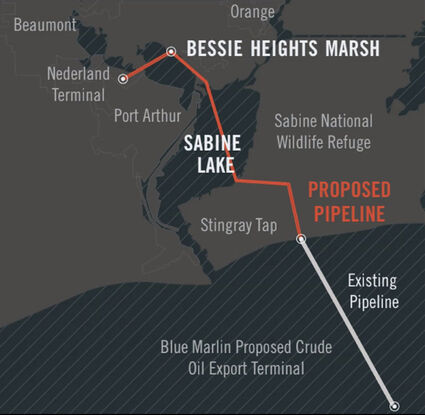 Plans to run a 42-inch crude oil pipeline around Bessie Heights Marsh and under the center of Sabine Lake are meeting opposition in Southeast Texas.

Houston-based Entergy Transfer Partners, a company that transports about 30% of the nation's oil and gas production via 120,000 miles of pipelines across 41 states, applied in 2020 to develop Blue Marlin Offshore Port to export domestically produced crude oil.

The U.S. Coast Guard and the Maritime Administration actually held community meetings in Cameron Parish, Orange and Jefferson Counties in December of 2020, but because of COVID-19 the meetings were held on-line with the principals in Washington D.C. Public comments after the meetings were allowed only via email over a 48-hour period after the virtual meetings.

But a quick check with Orange County Commissioners and a few sportsmen this past week revealed few had heard of Blue Marlin.

Beard hopes to change that. His groups are in the middle of an awareness campaign that includes door knocking, social media and TV advertising.

PACAN and Save Sabine Lake.org are hosting town hall meetings next week in Port Arthur and Bridge City.

The first is at 7 p.m. Tuesday, July 19 at the Port Arthur Civic Center. The second in Bridge City, beginning at 7 p.m. Thursday, July 21 at the Bridge City Senior Center.

The Blue Marlin proposal involves building a 37-mile pipeline from an existing Sunoco terminal in Nederland under the Neches River and through Orange County, then under Sabine Lake to connect to the existing Stingray Pipeline in Johnson Bayou, Louisiana, that runs into the Gulf of Mexico where ETP will build an offshore port capable of filling up supertankers.

Roddy Hughes of the Sierra Club said the pipeline was being built to carry 80,000 barrels of crude oil per hour, or 2 million barrels per day.

"This pipeline is a concern to me," Beard said, "because of the company that's building this pipeline: Energy Transfer Partners.

"An organization called Violation Tracker has found that over the last 12 years Energy Transfer and its subsidiaries have incurred over $589 million in fines – that's over half a billion dollars in fines – for everything from environmental offenses, to workplace safety incidents to market manipulation.

"That means, on average, an Energy Transfer pipeline leaked once every 11 days. That's why we're opposed to this project."

The Record attempted to contact Energy Transfer's media department to comment on these charges but received no response by press time.

The Blue Marlin filing on the U.S. Department of Transportation's Martitime Administration website shows that Energy Transfer's application called for construction to begin last fall and the offshore port operational by 2023.

The U.S. Coast Guard (USCG), in coordination with the Maritime Administration (MARAD), is preparing an Environmental Impact Statement (EIS) for the Proposed Action in accordance with the Deepwater Port Act (DWPA), the National Environmental Policy Act (NEPA), and applicable regulations.

"The EIS will assist the Maritime Administrator in deciding whether to approve the license application for the proposed Project."

"I just found out about it a year ago," Beard said. "I went before the SALT Tournament people and the Port Arthur Yacht Club," fishing and sailing groups based on Sabine Lake, "and nobody knew anything."

Don Carona, general manager of the Orange County Drainage District, said, "They've met with us and showed us the alignment," about the Blue Marlin project.

"But what was most on my mind was the potential interaction with the drainage structures on the Coastal Management Levee Project and I'm not seeing a problem right now."

The Sierra's Club Hughes was one of several environmentalists that partnered with Beard on a lightly attended February virtual conference to help Orange County landowners who could be affected by pipeline easements on their property.

"Energy Transfer is not the company I'd want building a massive 42-inch pipeline carrying 80,000 barrels of crude an hour in my community, or lakes, or out into the Gulf," Hughes said.

"Their record shows they're incapable of doing it in a way that's safe for the environment or host communities. 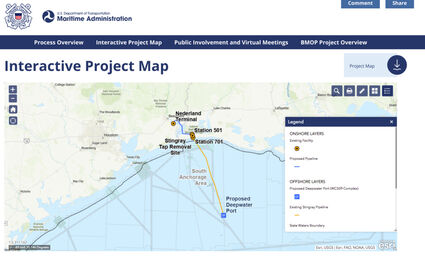 "John's big concern is they're using an old gas import pipeline and converting it to oil export. That's not an uncomplicated process and frankly, we just don't trust Energy Transfer to do it right.

"Doing it wrong will mean a big disaster for the entire Golden Triangle region. You're going to contaminate all the bodies of water around. You would hurt fishermen, hunters, birdwatchers, anyone else who enjoys the region's amazing outdoors.

"Even in a region that hosts a lot of oil and gas, this is a high-risk project. Your lives, your lakes, your rivers, your property are too important and not worth risking it all just so a few billionaire companies can export more oil to foreign markets."