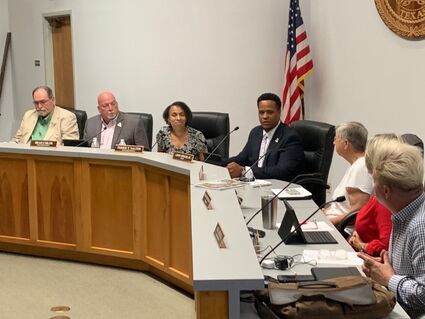 Bridge City Mayor David Rutledge has been on the job since 2016, but half the city council members – three out of six – are first-termers.

What better time to get back to the basics?

Rutledge and council members began the summer with a day-long training session which served as an orientation for new members and a refresher course for veteran members.

Sherby Dixon and Patty Collins were elected to city office for the first time in May. Aaron Roccaforte is still in his first three-year term.

"We've never really done it wholesale like this," Rutledge said. "It's been kind of piecemeal."

Normally, citizens volunteering for cities' advisory committees serve a defined term and are usually invited to stay on. Replacements are named as members step down, quit or move. The same goes for council members working on the committees.

"The only ones we really require council reps on are planning and zoning and the police contract negotiating committees," Rutledge said.

"According to our charter, the mayor is supposed to appoint these positions, but to my way of thinking I'd rather see what everybody is interested in and we'll pick it from there."

Dixon volunteered to be council liaison to the planning and zoning commission and was getting backing from Collins and the mayor, each of whom pointed out they usually attended the meetings as spectators, but Dixon would be the one reporting to all the council members, if an issue required it.

Roccaforte agreed to stay on as the city liaison to the Fire Department Pension Committee and Reed, though absent from the Thursday meeting, was "volunteered" to continue his service as liaison to the Animal Shelter Advisory Committee.

Gauthier, currently serving as President of the Southeast Texas Regional Planning Commission, was OK'd to remain liaison with that governmental body.

Collins and Fisette volunteered as liaisons to the City Collective Bargaining Committee for the 2021-22 Bridge City Police Association contract negotiations.

As mayor, Rutledge is required to attend SETRPC and contract bargaining meetings.

Smith has been with the OFD for 13 years and served as battalion chief for four years. Bilbo said eight people applied for the Deputy Chief job, four from within the department.

Ener has been with the department 30 years, Bilbo said, the past seven years as a battalion chief.

A payment of $47,500 was approved to Manshack & Sons, the only bidder for demolishing eight condemned homes.

"This will be 44 structures this fiscal year that we've removed," Kelvin Knauf, city planning director, said.

Council member Paul Burch related that in the past owners of condemned properties had sold the properties to buyers who were unaware the structures on them were condemned.

"The new owner comes to us and asks us not demo it," he said. "We tell them we can't not tear it down."

Knauf said that after the lengthy requirements to try to get property owners to clean up their structures had ended with condemnation proceedings, each building has been painted to indicate it was to be demolished.

"In the state of Texas, property owners have the obligation to know the details before they purchase a property," said Guy Goodson, city attorney.

LC-M Board appoints Temple as trustee 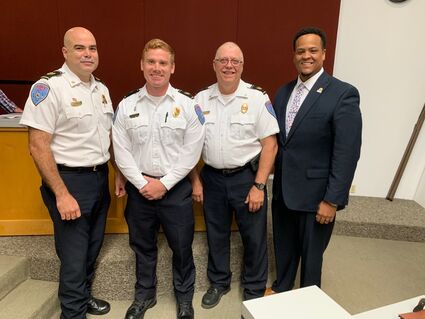 Little Cypress-Mauriceville school board members appointed former LCM grad Clint Temple to serve along them in 2023.

McIlwain resigned from the board earlier this month.

Temple and his wife Rebekah have three children, Aubrey, Kyndall and Harper, all students at LCM schools.

"I'm honored to serve our community as part of the LCM Board of Trustees," Temple said after Monday's meeting. "With immense regard to the students, faculty, staff and citizens of this district, I pledge to be an advocate for you all."

LCMCISD has another vacancy on its seven-member board, that of Aubrey Milstead, whose resignation was accepted May 9, one year into a three-year term.