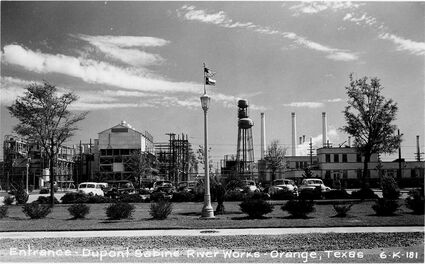 The lights from the shiny, new "city" were already glowing at night from the flatlands along the Sabine. But it wasn't official until the first week of July, 1947. Seventy-five years ago, the DuPont Sabine River Works officially began production.

Eight hundred men and women were working at the plant when it opened with another 1,400 men working in construction, according to a special edition newspaper printed for the event. More than 3,500 construction workers were involved during the peak construction.

The new petrochemical plant began making the "salts" used to produce nylon, a man-made fabric created by DuPont. DuPont had even trademarked the name "Nylon," with a capital letter, but the name was used so often for synthetic clothing that the company lost the trademark. The new threads produced hosiery for women to replace more expensive silk.

DuPont information from 1947 said the first nylon plant opened in Seaford, Delaware in December 1939, about a year after the product was created. The second nylon plant opened in late 1941, but in February 1942, the federal War Production Board took over nylon and all that was produced was for the military. The war ended in August 1945.

By that time, DuPont had already announced plans to build a plant outside of Orange. The city had boomed with people coming to work in the wartime shipyard production. Population estimates during World War II go from about 60,000 to 70,000. Rooming houses even rented beds by shifts.

The Orange Leader July 6, 1947, said Lutcher Stark gave up some of the land he raised his prize Brahma bulls on to accommodate DuPont. He and his first cousin, Edgar Brown, Jr., sold land to the company with legend saying at bargain rates. The two cousins did not talk to each other much since a dispute about their grandmother's will in the 1920s, but they posed for photographs with the plant manager when the plant opened.

The opening manager was H.L. Wolcott, who was already a member of the Orange Chamber of Commerce and vice president of the Orange Rotary Club. He was living at 610 Eighth Street in Orange, which is now in the Old Orange Historic District.

Some of the new executives at the plant, though, were living in new houses built especially for the company. The Cape Cod-style woodframe houses along Hart, Burton, and Rein avenues west of 16th Street are known as "The DuPont Houses" and were added to Orange's historic district in 2004.

The special publication when DuPont opened reported the plant was on a 1,000 acre tract of land about three miles southwest of the city. Orange at the time was the only incorporated city in the county at the time.

Gulf States Utilities, predecessor to Entergy, welcomed DuPont in an ad and described Orange as "one of the nation's fastest growing cities."

The new plant had a man-made 214-acre lake holding 435 million gallons of water to provide the plant's needs. The plant's water and pumping system was big enough to provide a water supply for a city of 450,000 people.

The plant used enough pipe for construction that if it was laid in a line, would reach from Orange to Oklahoma City. The foundation pilings totated 234,000 feet, about 45 miles worth. And 48,000 cubic yards of concrete were used, enough to cover a 1,000 square-foot block of land with concrete 54 feet deep.

Women were important local employees DuPont hired. Frances and Julia Brown of Orange (no relation to the timber heir) were among the first people with jobs. Frances started as a receptionist on March 14, 1946, and was an accounting clerk in 1947. Julia started as a stenographer and was promoted to oversee the stenograph office and mail room. The sisters had attended the University of Texas and lived at 410 Tenth Street.

The company was proud of hiring World War II veterans with 56 percent of the operators having served in the military. Of those, 4 percent had had disabling injuries.

Jones had joined the Army Air Corps in 1940 and was in the Phillipines when the Japanese invaded in 1942. He was captured and survived the Bataan Death March. He was a prisoner of war for two years and survived a U.S. Navy attack on a Japanese ship on which he was being transported.

Engdahl had been in the Army Air Corps and flew 30 bombing runs in a B-54 over Europe, including among the first run over Berlin.

Wood had been a navigator on a B-24 that had been forced to land in enemy-held territory in France. He was held for 14 months in a prisoner of war camp.

Steussy was had been in the Naval Air Corps and had been shot down over Guadalcanal in the Pacific. He and the bombardier had to ditch the plane and they survived four days on a life raft.

Gager had been on a B-24 bombing flight and was shot down. He spend 12 months in a German prisoner of war camp. 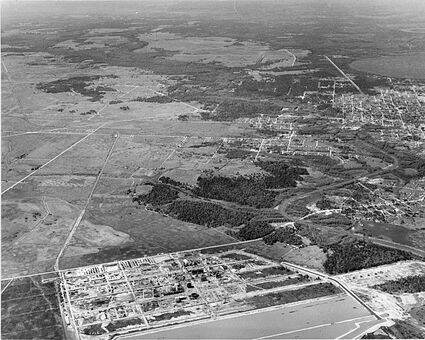 DuPont led the way for Orange to become a center of the petrochemical industry and led to the highway FM 1006 being known as "Chemical Row." Through the years, corporate name changes went across the sites of other plants built in the 1950s and 1960s. The named DuPont stayed up longer than the others.

In 2002, DuPont sold off its textile division, including parts of the original plant, to Envista of Koch Industries. Still, the DuPont name stayed prominent along Chemical Row.

It ended in April 2019. After Dow Chemical had announced it was acquiring DuPont, the name officially changed to Dow on that date during a ceremony attended by local business and government officials.