County fire districts will elect own boards in November 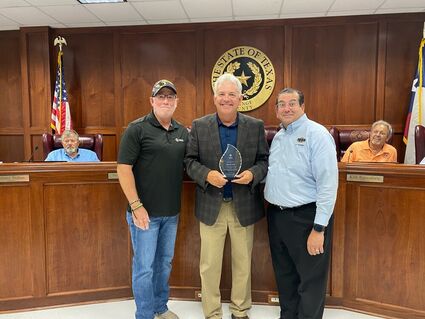 Chester Jourdan of the regional American Red Cross chapter presented Orange County Judge John Gothia an award for his service on the Red Cross board of directors. Gothia retired from the board after 20 years. Pete DeLaCruz, also with the Red Cross, is on the right.

For the first time in local history residents in the four Orange County emergency services districts will vote for their own boards of directors.

On Tuesday, Orange County Commissioners Court officially called the November 8th general election and will include the emergency services

districts. In the past, Commissioners Court appointed the board members, usually on the recommendation of the county commissioner in the precinct where each district is located. However, the emergency services districts do no coordinate with the county precinct lines. The Emergency Services Districts provide fire protection and rescues for their areas. Most rely on volunteer firefighters, but include some paid positions. The Emergency Services Districts collect property taxes within their districts. ESD 3 also has a sales tax that voters approved.

her office this year because it is the first year. Filing started Monday and will continue through August 22. The elections administration office is on Border Street across from the Orange County Jail. The office's business hours are weekdays 8 a.m. to 5 p.m. and is closed from noon until 1 p.m. for lunch.

Alford told commissioners the county will have to pay more for the election in November because the state is requiring more hours for early voting, including a minimum of six hours on a Sunday plus 12 hours for Saturday. However, next year the county should be able to cut back on the number of election day polls. The county now has 34 neighborhood polling boxes and within the next two years, the number should be down to 16 polling boxes for election day.

the county will be able to vote at any of the county boxes. Currently, voters must go only to their neighborhood box on voting day. Sometimes those boxes are changed and voters get discouraged after they need to go to a school to vote rather than the church fellowship hall where the voted the previous election.

Other court business included changing the legal name for Chevron-Phillips on tax abatement documents for a proposed new plant. Even though the corporation has not announced that Orange has been chosen for the site of a new petrochemical plant, a large tract of land along South Highway 87 has been cleared with pipelines installed, drainage designed, and large utility poles installed. If the corporation decides to build the plant, the land will be ready.

After the meeting, County Judge John Gothia said County Economic Director Jessica Hill has resigned and on Monday will begin a new job

with Entergy. Hill served as county EDC director for six years. She worked to broker the economic development deals for a new $1 billion Entergy

generating plant outside Bridge City along with the proposed $5.8 billion Chevron-Phillips plant.