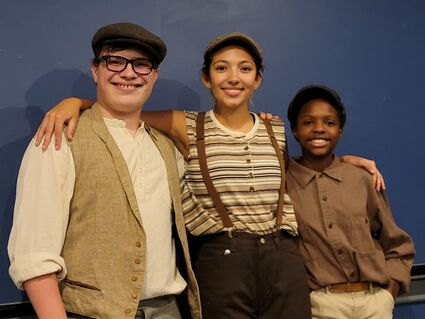 Debbie Pletcher is excited to be directing the Broadway musical "Newsies" for the Port Arthur Little Theater (PALT) which debuts this weekend. The story centers around "Newsies" aka paper boys that sold newspapers on street corners and their fight to battle price hikes in 1899 with Joseph Pulitzer and other publishers.

"This is my bucket list show," said Pletcher. "It has been a dream for me since the movie came out in the 80s with Christian Bale."

There are several Orange Countians in the show, including a trio of students from Little Cypress-Mauriceville.

Kiera Howington, a high school student at LC-M, is a veteran on the PALT stage. She plays Albert. "He's kinda sassy I guess you would say," said Kiera. "He has an attitude. He's one of the smaller newsies but has a personality. I've really liked playing him."

She tried out for "Newsies" to get more experience in musical theater. She's been in dramatic productions.

"I thought since I've been coming here so long, it would be a good experience."

This is Cole Watson's first time at PALT. He has been a member of the LCM Bear Players since his sophomore year and was looking for more experience in musical productions.

He also did some theater previously as a child at West Point, before moving to Orange County when he was in fourth grade.

Cole is part of the ensemble and plays Spot Conlon. "He's a character that doesn't have a lot of lines, but he's really important to the story," said Cole. "He's the head of the Brooklyn newsies." Spot was critical to the effort for his support in bringing in the newsies from the other boroughs.

Currently Cole is entering his senior year and has already secured a $1,000 per semester scholarship at Stephen F. Austin University for theater studies, so it is high on the list of schools he is looking at.

Jordyn Chargois is a student at LCM Junior High School. She has danced for years but this will be her theater debut.

"I love to sing and I love to dance. Here I get to put it together," said Jordyn. Making new friends has been the best part of her experience. "I make new friends everywhere I go."

Her favorite part of the show are the tricks and tumbling she gets to do as part of the choreography. As far as a favorite number in the show? "Honestly, I like them all," she said.

She's got a point. "Newsies" is filled with many great song and dance numbers.

This is Pletcher's 12th musical to produce for PALT. She enlisted four assistant directors to help her with the production.

"Two of the four also run music and vocal direction for the show," said Pletcher.

Carson Lewis and Kristen Baker begged to be choreographers.

They double cast all the main parts because people from all over Southeast Texas turned out for the auditions. Pletcher said normally musical auditions draw about 50 people, but over 90 showed up for "Newsies." She attributes the great turnout to the fact, to her knowledge, this is the first production of "Newsies" by a local community theater in the area with adults. 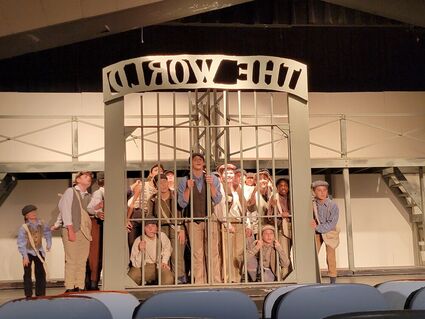 "Newsies" view of the world from the Port Arthur Little Theatre (PALT) stage.

"I know it's been done with kids in Kidmunity," said Pletcher, referring to Beaumont Community Players children's program. "I know some of the high schools have done it, but no one else," she said.

"There was so much talent we couldn't tell someone, 'oh you can just be in the ensemble,'" said Pletcher. "It was amazing the amount of talent. I was blown away."