Cardinals look to improve in second year under McGuire 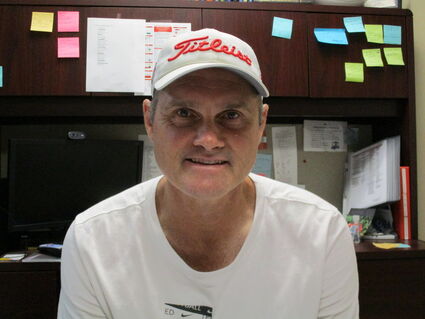 This season will be the second year under Cody McGuire as the head football coach at Bridge City. The Cardinals will be looking to improve on last year's results.

The season could have been even more special for the Cardinals by making the post season. "We were a few plays away from making the playoffs. We played Silsbee really well, and we had big wins over H-J and Liberty. Our kids fought the whole year. I'm going to miss our seniors that graduated. They bought into our program, and I appreciate those guys for what they contributed," McGuire recalled.

There are returning Cardinals that will be important leaders on the Bridge City offense. A returning all-district performer for the Cardinals at the H-Back is Noah Broussard. Jerris Brown is a junior at wide receiver that should catch a lot of footballs this season.

Starting in the offensive line will be senior Matt Livingston for the Cardinals again. McGuire said, "Those are some of the guys that we've got coming back on offense that I feel like are going to do a great job for us."

An all-state performer at defensive end last year was JS Bearden who returns for Bridge City. Bearden will be shifted to an outside linebacker in the Cardinals' new 3-4 Defense for this season.

One of the leading tacklers last season for the Cardinals was Mason Pruitt, and he is back as an inside linebacker. Rayburn Hebert was a starter as a cornerback last year and will move to be a starting safety. In the defensive line Nick Lejeune will start at the noseguard position in the 3-4 alignment Bridge City is going to this season.

There will be some new faces on the Bridge City varsity who Coach McGuire believes will contribute to the success of the Cardinals. Stephen Stone is a junior who will play safety. Stone was on the junior varsity last year, and the coach thinks Stephen will do a great job in the defensive secondary. Also moving up from the junior varsity is Jagger Carlin who will be a starter at cornerback.

The Cardinal quarterback last year was Ethan Oceguera, but he graduated in the spring. Sophomore Hutch Bearden is expected to step in and be the starting quarterback for Bridge City. Bearden will be throwing passes to another sophomore Case McGuire at wide receiver.

Bearden has done a great job according to Coach McGuire this summer to prepare himself to be the leader of the Cardinals' offense. "He looks really good, so we're excited to see what he can do. We've got to find a backup, but I think Hutch is going to be the guy," McGuire expressed.

Two move-ins for the Cardinals should see plenty of playing time. Gavin Bodin moved to Bridge City from Port Neches. Bodin should do a great job as a receiver. Kayden Kibodeaux moved over from Orangefield and will play in the defensive line for McGuire.

The second priority is developing depth at key positions to make sure there are Cardinals that can step in when needed. McGuire reminded, "Last year we lost four starters to ACLs, and so you've got to have guys behind the starters, it's that next man up mentality, so when somebody goes down somebody's got to step up and make plays when they get the opportunity."

Coach McGuire had to replace his offensive coordinator during the summer. Jason Aubry comes to Bridge City from Illinois where he was the head coach at Concordia University two years ago. "Great offensive mind, does a great job teaching, hasn't been here very long, so that's one thing we're going to be focused on is trying to get the offense taught to our guys so they're all on the same page," McGuire informed.

Bridge City will run the Spread in different formations. It will be a lot of 10-Personnel and some 20-Personnel. McGuire stated, "We're going to be throwing the ball around and running it, so it's going to be a balanced Spread Offense, and we'll see what happens."

That said McGuire admits it does take a lot of work to achieve those loft goals. "Winning will always be our goal. We're going to work to achieve that goal. Our kids worked hard all summer, all off season, and so we're just going to roll with it that way and see where it takes us," McGuire concluded.

Fans of the Bridge City Cardinals will have an additional way to follow them this fall. The Bridge City Independent School District has signed up with VYPE Media for the coming school year.

VYPE will produce two magazine editions this year for the Bridge City ISD with one to cover the fall sports and school activities while the other edition will emphasize the spring sports. VYPE just completed the photo shoot for the fall edition and a hype video to promote the publication.

Coach McGuire is excited about the VYPE publication coming out soon that will cover the football team, the volleyball team, the cheerleaders, the dance team, the power lifting team, and the cross-country team. "All that will be in this first fall edition, and so it just highlights Bridge City kids, includes some stories about Bridge City kids, and highlights our school district and the great things that are going on like the new facilities we have with the recent passing of the bond which helps get us a new junior high school and a new CTE building. A lot of great things are happening in Bridge City," McGuire expounded.