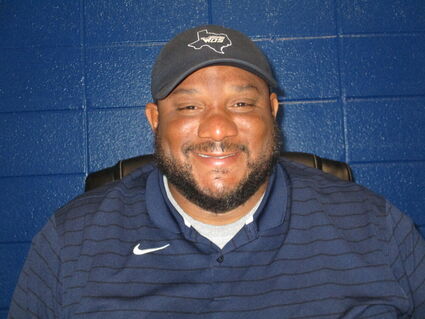 A new era in West Orange-Stark football begins this season. The Mustangs have a new head coach in Hiawatha Hickman who moves up to the top position after serving as the Mustangs' defensive line coach and then defensive coordinator the last six years.

In Cornel Thompson's final season as the head football coach the Mustangs had another successful year going 11-2, winning their district championship while going undefeated in the district, and advancing to the fourth round of the state playoffs. West Orange-Stark lost to the eventual state champion China Spring Cougars.

Last year was a typical great year for West Orange-Stark football according to Coach Hickman. "We started out a little slow with the loss at Nederland, but then we started to roll as the year went on typically doing what we normally do, won another district championship, won three playoff games in a row on our way to the quarterfinals. We felt like we had our chances, we had a few injuries that kind of affected us in that game, but all and all it was another great year. That's like eleven of the last twelve years that we've been to the fourth round," Hickman reminded.

Robinson is the front runner this season to be the starting quarterback with his experience from last year but he will face some competition from Marcus Turner a younger guy who has all the tools for the first team position. Hickman added, "It'll be a competition right up until the Nederland game. The one that doesn't win the position will probably play in the defensive secondary for us."

At running back is Jamaal Shaw who rushed for about 400 yards last season for the Mustangs. Shaw has never been the featured back prior to this season because of the quality backs ahead of him like Elijah Gales. "Shaw will get to carry the football first this year," Hickman announced.

Joining Shaw in toting the football for West Orange-Stark is Dakarion Judge. His contributions to the Mustangs' scoring are varied. Judge runs the jet sweep, he can take snaps in the Wild Cat, and he returned three kicks for touchdowns last year.

Opening holes for Shaw and Judge will be offensive lineman Davin Heard who plays hard, and at 6-3, 285, has a mean streak for blocking opposing would be tacklers. Hickman praised, "He's going to be an asset for us at right tackle. Great kid, great kid."

Another very good running back for the Mustangs who played some last year is Jailen Brown. "He's explosive, he's a one touch, one cut guy that could go at any time. All these guys had great off seasons, so we look forward to those guys producing," Hickman replied.

A key to the success of West Orange-Stark in football has been defense over the years. Naturally, with Coach Hickman moving from defensive coordinator to the head coaching position he has a strong feeling for the Mustang defense.

When you talk Mustang defense you start at linebacker, and this year that means Jalen Gilmore will get a lot of attention. Gilmore played fourteen games last season for West Orange-Stark as only a sophomore which means he is a player. Gilmore had 120 tackles during the year. Hickman elaborated, "He's in great shape. He's a guy who's going to lead us on defense."

The free safety for WOS will be Darren Anderson. He is a smart player and gets the Mustangs aligned in their positions prior to each play. Anderson had four interceptions last year and ran one of them back for a touchdown against Nederland in the season opener. "He's a great kid, a great leader. He's going to be a big asset for us this year," Hickman stated.

In the defensive line Andrew Wilson returns at the noseguard position. Wilson has been a three-year starter and should make a lot of plays in the middle of the Mustang defense. Wilson will be used some in the offensive line as well.

Jamaal Shaw is the ultimate two-way player combining his skills at running back on offense with his outstanding ability at cornerback when playing defense. Coach Hickman rates Shaw as one of the top five cornerbacks in the state of Texas having received offers from numerous colleges to play for them when he graduates. Shaw is 6-2, 190, with exceptional speed.

Dakarion Judge was second team all-state at cornerback for the Mustangs. Judge maybe small in stature at about 5-6 which led other teams to throw in his zone resulting in six interceptions for him last year, two of which he returned for touchdowns. Hickman added, "The guy's a player, he's an explosive guy, plays on offense for us, he's our jet sweep guy, he's an inside receiver, kick returner, he's a typical West Orange-Stark skill kid that can play anywhere." Judge may even be the Mustangs' third string quarterback if needed.

One of the new Mustangs joining the varsity for the first time is Marcus Turner who is involved in the competition for the starting quarterback position. Turner can make all of the throws, he just lacks experience at this time. "I think experience will bring him along, he needs to play, but he has all the tools you look for in a quarterback. He's a great leader, throws the ball well, the kids follow him," Hickman summarized.

Running back Raymond Mallett is young a Mustang that should get some carries this season on the varsity. Mallett has been a scoring phenom in junior high and on the junior varsity the last couple of years. He is an explosive running back that can also play slot receiver. Mallett will be Shaw's backup this season.

One position Coach Hickman is looking for is a kicker. The Mustangs lost the primary prospect to be the kicker, but the process is underway to find a kicker and a punter. Hickman explained, "I think we have a punter. We have enough athletes I think we can find a punter, but having a consistent threat as a kicker is what we're trying to find."

Hickman inherits the winningest program in Texas high school football and does not plan to let that honor fade under his leadership. "Expectations are always high here. We come out in preseason in the top five every year. Some people are predicting us to play for the state championship or even be close to a state champion, our kids expect it. We expect to be playing in December. My expectations for them is to continue to work, and it's all about the work, the work we put in, the time we put on that field, the way we develop talent, that all goes in to keeping this tradition alive," Hickman concluded.

West Orange-Stark will be working with HUDL to have Mustang games streamed live this season. HUDL cameras have been installed at Dan R. Hooks Stadium that will actually allow the games to be broadcast on the You2 channel.

All that is currently needed for a regular broadcast of the West Orange-Stark games being carried is sound being added. Work is being done to complete the main press box at the football field since the temporary press box used last season is not adequate for the more expanded streaming sound system that is necessary for the broadcast. When that is done the West Orange-Cove School District will be looking for an announcer to do the games online.