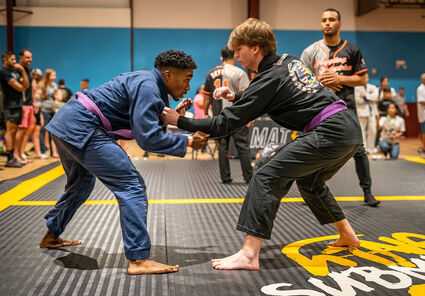 Noah Flynn (Right) competing in the second round GI Competition against Arthur Garcia from BJJ Revolution Team featured on left.

The Mooney Boys team competed in 40 total matches bringing home 3 gold, 7 silver, and 8 bronze medals. The Competitors ages ranged from 10-19 years old, with three of the competitors competing in the adult divisions.

Erin Ayers, a 17-year-old recent graduate of Vidor High School, competed in the women's bracket, dominating her opponents, and bringing home 2 gold medals. Two of those matches ending by submission. Ayers is known around the academy as the "Boy Killer" and currently holds a purple belt. She has been training for nine years and is an assistant coach at the academy. "I'm so grateful for these amazing women who came out today to help not only me but help themselves get better. Through all the blood, sweat, and tears I can truly say that Jiu Jitsu is my sport," says Ayers.

Noah Flynn, a 17-year-old senior at Vidor High School has been training for 10 years, and currently holds a Purple Belt. Like Erin, he is an assistant coach at the academy. "The tournament was a blast, it was great to see how much the kids have improved," says Noah. Noah competed in the men's adult bracket taking home 2 silver medals.

Seth Carpenter, a 19-year-old Mauriceville resident who is attending Blinn College, competed in his first tournament. Seth won Silver in his Gi competition winning one of his matches by an Ezekiel Choke. In No Gi, Seth won 2 of his 3 matches by submission bringing home a gold medal.

The Adult matches can be viewed on Mooney Boy's YouTube channel; MooneyBoysBJJ. 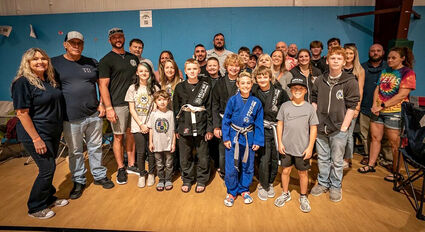 Mooney Boys Jiu Jitsu team traveled to Houston this past weekend and competed in a tournament. People from all over the world competed. There were 9 people from Southeast Texas that competed.

"This Tournament was an incredible opportunity for growth and learning for the coaches, athletes, and parents of Mooney Boys. The sportsmanship displayed in both victory and defeat by our athletes was admirable. I couldn't be happier about the effort made by our competitors, the support shown by our parents, and the sacrifices made by our coaches. Our athletes train extremely hard, and they laid it all out on the line this weekend showing tremendous heart."

We invite you to join us and become part of the Mooney Boys team. We promote structure, self-discipline, and respect through the art of Brazilian Jiu-Jitsu, Boxing, and self-defense. We aim to build character and promote self-esteem in a family friendly environment, an everyone's first week is FREE.