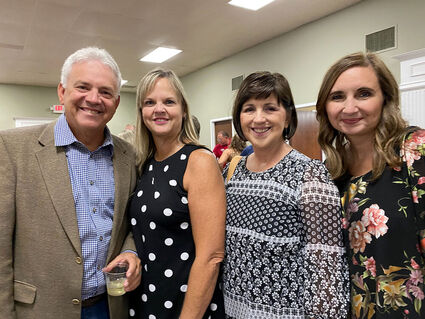 The naked truth was revealed Thursday night at the Bridge City Chamber's roast of County Judge John Gothia. However, it wasn't him that was naked, though the question is left: Was he wearing Spiderman or Batman underwear?

The Bridge City Chamber of Commerce through the years has used a "roast" of prominent citizens as a fundraiser. The roast of Gothia was the first since 2015, when Kirk Roccaforte, now a county commissioner, was roasted when he was Bridge City mayor.

Schossow has lived next door in Bridge City to Gothia and his family for more twenty years. She told the story of getting ready to shower one night about 11. The water was running and she was about to step into the shower. However, she heard her husband, Tim, who passed away two years ago, hollering for her to come see him.

She said she walked into the room naked and demanded of her husband "What do you want?" Then she spied next-door neighbor Gothia. Gothia later told the audience she couldn't have been too mad, because she went and put a robe on and then made coffee.

Jones has become good friends with Gothia and his family through the years because of their love of fishing. The two were instrumental in getting the local participation to attract large national Bassmasters professional fishing tournaments to Orange.

Jones said one year he and his family went with the Gothias to Colorado for a snow skiing trip. He woke up in the middle of the night hot because the heat was turned up and needed to walk to the bathroom. He decided not to get dressed because he was sweating and thought he could sneak down the hall without anyone seeing him.

Gothia, however, had also gotten up. Once again, Gothia got a look at a naked person. Jones said Gothia was wearing only underwear. But Jones can't recall whether the underwear was Spiderman or Batman. Whatever, looks like Orange County's judge likes super heroes.

And lots of people at the roast consider Gothia a type of local super hero. He grew up in Bridge City and in his adult life, has spent decades working as a volunteer with a number of civic organizations including the American Red Cross, Camp Fire USA, United Way, and chambers of commerce in Bridge City and Orange.

Jones also told a story about him sharing a one-bedroom RV with Gothia during Bassmaster tournaments at the Orange Boat Ramp. Some of the tournament volunteers camp at the site for days so they can work from daylight until late at night.

Gary Stelly of kogt.com served as master of ceremonies and started the roast off by commenting how brave Gothia is to be roasted in front of a crowd right after announcing he was getting a pay raise.

Stelly also quipped that Gothia's wife, Glynis has a nickname for him, "Swing Bridge." She uses it "because sometimes he works and sometimes he doesn't," Stelly said. The quip played off problems the county has had in recent years keeping the East Roundbunch Road swing bridge operating.

Gothia chose his roasters, who were longtime friends, including banking executive Joe Love, described by Stelly as "the pride of Newton County."

Love said he couldn't tell a lot of his stories about his longtime friend, but he did relay why Gothia might be called "Stubby." Not long ago, the county judge lost the tip end of a finger after getting it smashed while moving a large barbecue pit at the lake.

Maureen McAllister of the Orange County United Way was another roaster who talked about how Gothia could talk anyone into volunteering. He asked her to volunteer working at the beer booth at a civic event held at a local rodeo arena. She said she work jeans and cowboy boots like others at the gathering. But the beer booth had women in their young 20s wearing short cut-offs and small tops. McAllister heard the young women talking about their pay.

"You're getting paid?" McAllister asked them. Their reply was "Well, yeah. Who would do this for free?"

She also praised Gothia for being a true friend and reaching out to check on her when she was going through a difficult time in her life.

Also roasting, and toasting, Gothia was Johnny Trahan, who retired from a career at Entergy and then was elected Precinct 1 County Commissioner. The two have been friends since meeting many years ago at what was then-called Lamar University-Orange.

Attendees learned about Gothia's passion for the water and his love of boats. He has five boats, including a kayak. However, the chuckles about "The Booty Boat" were a bit lost on those without the intimate details. 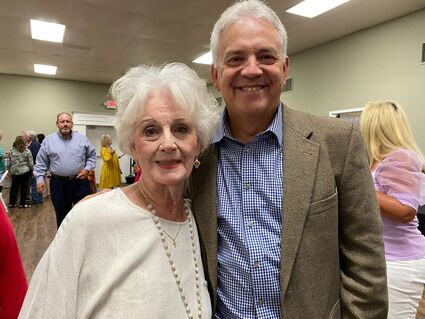