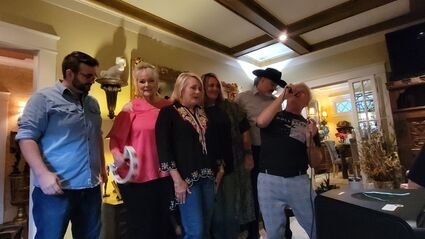 "We've worked hand in hand with the depot for years," said Paul Burch, president of OCP. They provide entertainment for events such as Depot Day in exchange for use of the venue for fundraisers such as the upcoming dinner and country music show.

A barbecue dinner consisting of chicken and links, beans, potato salad and dessert will be served at 6:30 p.m., with the musical performance starting at 7:37 p.m. Complimentary beer and wine is included. Tickets are $75 each or $125 for a couple.

"Robert Currie of Innovative Air Solutions is doing all our cooking for us," said Burch. "We, the cast is providing all the food and everything, but Robert is going to cook it for us."

Chad White of Real Stage Productions is providing sound for the event.

Nine members, including OCP veterans and some new to the stage make up the cast. The new member performing is Jason Rodrigue. Amy Picard is a now and then face at OCP. Veterans in the cast include Burch, Judy Smith, 'Rico, Cydney and Codie Vasquez, Janet Bland and Tanya Guillot.

The show will feature many country classics such as "If your gonna play in Texas," "Rose Garden," "I will always love you," "Let me be there," "The Ride" by David Allen Cole and "Rollin."

Besides music, comedy skits and audience participation will be included according to Burch.

The 7:37 p.m. performance start time is traditional for OCP shows from when it began many decades ago. Most live theaters start their shows at 7:30 p.m., but OCP's unusual start time stems from back in the day when freight trains ran down division street. There was always a train passing in front of the theater at 7:30 and the slight delay made sure the train was down the track and didn't interfere with the start of the show. They have kept the start time tradition even though they are no longer on Division Street and the trains no longer take that path.

There are two reasons for the upcoming event.

"And we need money for OCP," said Burch

The board of OCP was forced to abandon their location on Division Street in 2017 after flooding a second time caused their flood insurance rates to rise to a level they could no longer afford. They purchased the empty twin cinema building on Edgar Brown Drive and have worked to remodel it. The process has been slow and they are doing the remodel in phases as funds are raised. Currently, they are working on the "black box," a theater that has a flat floor instead of a stage and the audience is seated around it.

"The one side is about 80 percent complete," said Burch. "when it gets finished, we'll open that side and tackle the other side. They could once again start having productions at the theater before the entire project is complete.

With the black box's flat, square room configuration, it is also suitable for other types of events, such as reception/cocktail parties, etc. It will give them a proper location to host other fundraising events. The second side of the playhouse will be a more traditional setting with a stage and theater seating.

Once the entire theater is complete, it will allow them to have two shows running at once or have one show running in the theater and rehearsals for the next show in the black box. It will give them many more options than the old location provided. 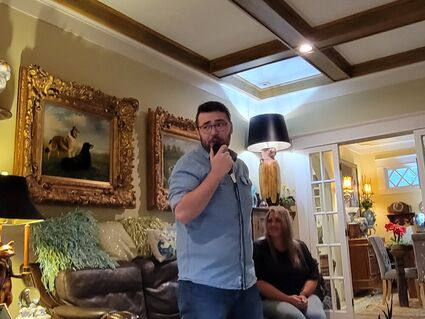 'Rico Vasquez practices a number at the home of Paul Burch for the upcoming OCP show, while Amy Picard looks on.

They don't have a target completion date because they don't know how long it will take to raise all the funds needed.

"In October we plan to do 'Move over Buffalo,'" said Burch. "It's a small show." They will have to do it an alternate location, yet to be determined. The community has been gracious to offer space for a few shows since the shutdown of the theater, but it's not like having their own theater home at their disposal.

"We've got to step out in faith," said Smith about planning the October event even though they have, yet not found where it will be held.

They will continue to host fundraising events until OCP renovations are complete.

Tickets can be purchased at Lookin' Good Hair Salon at 3711 N. 16th St., Orange or may be purchased online at: https://buy.ticketstothecity.com/purchase.php?date_id=45103