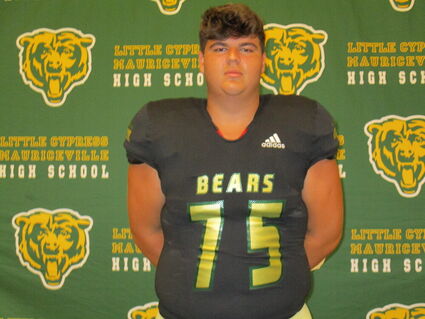 Build it and they will come is a familiar saying that could be adopted by the Little Cypress-Mauriceville Bears football team. A new artificial turf field is being installed at Battlin' Bear Stadium but will not be completed in time for the start of the Bears' football season at the end of August.

The field of green being under construction has forced the Bears and Coach Eric Peevey to work out on the practice field located behind the Don Gibbens baseball field. It was a good first week of practices for Little Cypress-Mauriceville according to Peevey.

Despite so much rain in the area over the last week the Bears were able to dodge the precipitation for the most part and get their practices completed. "Our first day of practice we actually started outside and then we had to go in and then come back outside. Our kids are doing a good job adapting to that. I tell the kids, we're from the mud that's what we do, we go out there every day and get into it. Until the stadium's field gets done that's pretty much what we're going to keep doing," Peevey replied.

The first week is about working hard and learning which the Bears did even if the conditions were not what they hoped they would be. Peevey indicated, "The kids have had a great attitude this week at practice, and I've really felt like we've learned a lot, made some mistakes, but got better, and that's what we're looking for."

The first week of good attitudes led to the annual Green and Gold scrimmage on Saturday. The intrasquad game allowed the coaches to evaluate the players in a game like situation for the first time this season.

Senior offensive lineman Brady Wright has been moved to center. Brady is 6-4, 290 pounds, and he has had a great offseason. He lost a little weight over the offseason, is now quicker, and has had a great start to the two-a-days Peevey commented.

Another offensive lineman sophomore Carson Phelps is moving up from the freshmen team to the varsity this year. Peevey expects Phelps to be a starter for LCM which is a big jump, but Carson is a big boy, he is needed, and is getting better each week.

Jordan Pollock has been a great surprise for Coach Peevey in the defensive line. Pollock is also playing tight end on the offensive side of the ball.

Defensive end Jarves Riley gives the Bears two dynamic game changers at that position along with Texas Tech commit Amier Washington. "Jarves had a great off season and he's proving it every day of practice. He's just head and shoulders above of where he was at last year," Peevey praised.

Stepping up as a senior is Isaiah Picard. He has done a great job so far and will probably play for LCM at wide receiver and in the defensive secondary.

The first week of practices has helped Peevey fill some holes with Bears who have come ready to play. Peevey said, "Right now we look like we're in a really good position to fill a lot of those spots left vacant from last year."

Starting the second week of practice the goal for Little Cypress-Mauriceville is taking mistakes that were being made in the first week and get better from them. Peevey and the coaches will be watching film of the Green and Gold scrimmage with the players to find areas that need improvement.

The object of watching the film of the scrimmage Peevey pointed out is not to continue to beat your head against the wall doing the same negatives over and over. "Teach our players that we're going to make mistakes we understand that, but that is why we film everything so they can see themselves make the mistake and now make the adjustment of correcting it. If we can get to the point where our players can understand how to correct their mistakes on the fly, learn day to day, and continue to get better we'll be in a great situation," Peevey analyzed.

The first regular scrimmage for the Little Cypress-Mauriceville Bears will be Friday at Orangefield. LCM is actually two classifications above the Bobcats but Peevey still anticipates a hard fought contest for the Bears.

One reason Peevey sought the scrimmage with the Bobcats is because they run the Slot-T Offense. That is the same offense the Vidor Pirates use, and the Pirates and Bears were co-district champions last year and will play each other in district later this season. 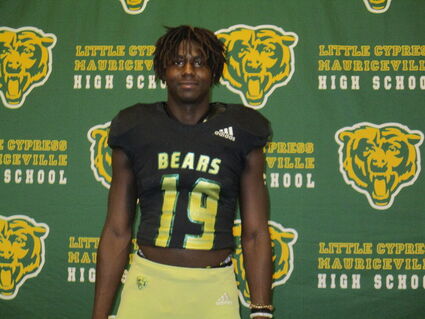 Peevey wants the Bears to play an opponent in the first scrimmage that is physical and he knows Coach Josh Smalley will have his Orangefield Bobcats ready to do some popping when the two teams meet on Friday. Peevey reminded, "Last year our scrimmage was a great scrimmage with them. I felt like both teams got a lot out of it, and that's what we need at this point is we need somebody like Orangefield who's very physical and will come hit us in the mouth to get us ready. I always look forward to this scrimmage because it gives our kids a chance to see a physicality that we haven't seen going against each other and at the same point it gets us ready for the season."

A focal point of the scrimmage will be getting the Bears defense ready to install changes to play the Slot-T which is much more run oriented compared to the pass dominated Spread Offenses so many of the opponents play against LCM. "There's a lot of learning in that and our kids are going to have to learn a lot. They're going to make mistakes in the scrimmage, but it's going to help us correct those mistakes before we have to see it later in the year," Peevey concluded.