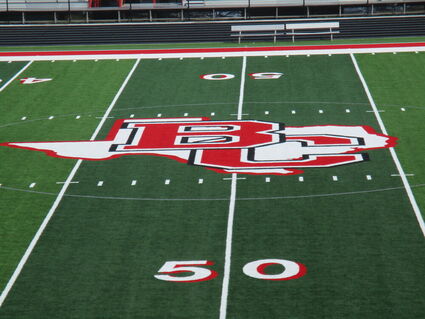 The Bridge City Cardinals came to the first week of practices for the football season ready to work and improve themselves. The Cardinals will strive to be their best as the season progresses.

Coach Cody McGuire said after a slow start on the first day the kids rocked and rolled during the rest of the week's practices. "They came out and were physical and were aggressive and worked real hard the first week," McGuire reported.

Although the weather may not have been ideal, Bridge City had no real concern because of the artificial surface on the field at Larry Ward Stadium. McGuire indicated, "We didn't have any problems during the week. We got all our practices in and got our scrimmage in on Saturday, everything was perfect."

The annual Red and White scrimmage was an intrasquad game between the Cardinals on Saturday. The Cardinals got after it in a good scrimmage that the coaches could observe them in their first game like condition workout.

Offensively several of the Cardinals performed well. Gavin Bodin and Jerris Brown did great at receiver, Hutch Bearden at quarterback passed the football to them, and Caden Welch ran the ball effectively.

Up front the defensive line got strong performances from Kayden Kibodeaux and Nick Lejeune. Outside linebacker Merik Aras just a sophomore and senior Mason Pruitt at inside linebacker played well.

The scrimmage was an excellent culmination of the first week of practices at Bridge City. "Everybody's working hard and making things happen," McGuire applauded.

Week two of practices climaxes on Thursday for Bridge City with a scrimmage against the Vidor Pirates. Coach McGuire scheduled the scrimmage with Vidor because he knows the Pirates are a very physical team and they run the Slot-T Offense.

This scrimmage will be a good challenge for the Cardinals to achieve the same intensity as the Pirates. "They thrive on being physical. It's a good test for us," McGuire indicated. "It is always our goal to have the Cardinals to be the most physical team on the field every game. That's what we're preaching this week on both sides of the ball is being physical and more physical than every team we play."

The Orangefield Bobcats also use the Slot-T and are the opponent in the Cardinals' opening game of the season in two weeks. "Our kids are looking forward to it and it will be a good evaluation point for us," McGuire acknowledged.

To win in football the team has to be mentally tough and physically tough, which Coach McGuire thinks his Cardinals will achieve that by playing tough physical teams like Vidor in the scrimmages. The Pirates are a strong team in a higher classification who were co-district champions last year.

The scrimmage with Vidor will be an early test for Bridge City. McGuire evaluated, "Playing tough teams helps you get tough, and we do play Orangefield in Week 1. It will help us with a look at the Slot-T in the scrimmage and then we'll play it in Week 1."

The Cardinal coaches will be busy evaluating everything during this first scrimmage. Every position will be studied to see where improvements can be made before the start of the regular season. 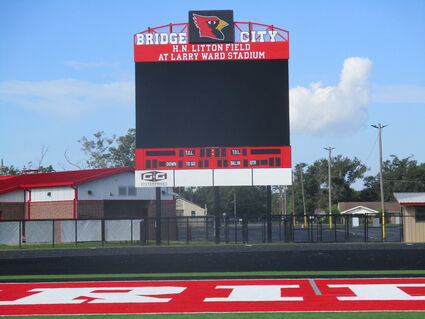 The scrimmages are a very important tool to prepare the team for the games that will count. "We evaluate every position in every scrimmage and during every game. We want to get better every time we get out on that field, so we're going to evaluate everybody every time we play," McGuire explained.

The scrimmages serve another useful purpose according to Coach McGuire. "We also need to find some backups because when you go into a season you need depth. We have got to evaluate some of these younger guys that are on varsity and some of these guys on the junior varsity that might be able to bring up in case of injury. All positions will be evaluated and we will see who can help us," McGuire concluded.

"Our Day to Shine" is the theme for the scrimmage with proceeds being donated to the Texas High School Coaches Education Foundation (THSCEF) Benevolence fund which was created by the Texas High School Coaches Association Board of Directors to assist athletes and coaches experiencing hardships. To date over 1,165 schools have participated in "Our Day to Shine" and have raised over $721,000. The THSCEF has paid over $641,000 to athletes and coaches in need.

The scrimmage between the Bridge City Cardinals and the Vidor Pirates will be this Thursday, August 12, at Larry Ward Stadium. The freshmen and junior varsities will scrimmage beginning at 5:00 PM. The varsity scrimmage will start at 6:30 PM.