How did MLB's two best teams fare after trading deadline? 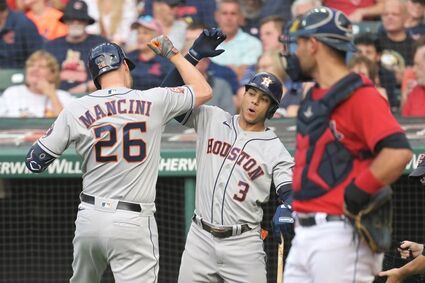 The Houston Astros and New York Yankees have had the best win-loss percentage in major league baseball since April, especially in the American League, where they both made trades last week that would improve their chances of playing in the World Series when October rolls around.

The Astros have been doing most of their winning in the first four months with their pitching—both starting and relieving—while the Yankees have been outscoring their opponents with their big bats.

Last week when the trading deadline ended, it was apparent that both teams made deals that strengthened their weaknesses with the Yankees going after both starting and relief pitching while the Astros picked up a couple of stronger sticks for their feeble team batting average.

Houston’s third-year general manager James Click added three players to manager Dusty Baker’s roster without having to give up too much talent in return.

“How do you strike that balance of the success we’ve had here and not changing what makes us successful, but at the same time not getting complacent and letting yourself ossify and your process go stale and you wake up and everybody else is three years ahead? It’s a difficult mindset,” Click lamented to the Houston Chronicle last weekend.

In the Click-Baker era, the Astros have continued to win and win, all while remaking their image and gradually winning back believers across the country, the article added.

This twosome came about after the sign-stealing episode that took place in 2017 and led to the firing of general manager Jeff Luhnow and manager A.J. Hinch for allowing it to happen.

That placed the Astros in a pinch without a general manager or field manager with spring training less than two months away.

So, the front office just took a shot in the dark and hired the aging Dusty Baker, who had been successful in his many managerial stops, and Click who did a marvelous job turning the Tampa Bay franchise around.

The first item on Click’s agenda was to find competent backup catching relief for 35-year Martin Maldonado—one who can hit and throw out stealing baserunners.

The AL East cellar-dwelling Boston Red Sox were in town and the two general managers struck a three-way deal for 31-year-old catcher Christian Vasquez, who had surrendered his playing time to a promising rookie.

Houston also wanted a versatile player who can hit and play several positions and were able to snatch Trey Mancini from the Baltimore Orioles.

On his fourth day in a new uniform (Friday), the Astros had a one-run lead and the bases loaded with two outs, leading 2-1 at Cleveland.

Mancini drilled the ball out of the ballpark en route to an easy 9-3 victory. This is what the doctor ordered for the Astros. Instead of having to scratch for every run with a slender lead, they now had hitter who can pad a lead with one-swing of the bat.

The Yankees hadn’t won a World Series since 2009 and were bound and determined to make 2022 their year. And they’ve had the best record the entire season, with the Astros hot on their tails. But they didn’t think they had a starting pitching rotation strong enough to get past Houston in the American League with Gerrit Cole and his backup band.

According to this week’s edition of USA Today Sports Weekly, “the Yankees were petrified that All-Star closer Aroldis Chapman may never bounce back. They questioned whether Clay Holmes could sustain his brilliant success through October. They long gave up on Joey Gallo.”

They needed another front-line starter with All-Star Nestor Cortes (9-3, 2.53 ERA) having already pitched a career-high 106.2 innings, starter Luis Severino not expected to return from the IL until September with a lat strain and Jameson Taillon (10-2, 393 ERA) yielding a 6.98 ERA in his last six starts.

After Cashman’s array of moves, the Yankees are a lot more comfortable heading into October when they feel certain they will meet the Astros for the AL championship.

“The Yankees gave up seven pitching prospects in a week. Still, prospects are only prospects. They land you on the cover of Baseball America. Star players are the ones who land you on a World Series parade float,” the article concluded.

KWICKIES…Although the Houston Astros are satisfied with last week’s trades, they still are searching for offense, scoring only one run in the final two games of the four-game series at Cleveland last weekend. Perhaps they can use the excuse that Dusty Baker was absent after testing positive for COVID-19 last week. But his batting average isn’t too high either.

By the time this column hits the streets Wednesday, wide receiver Odell Beckham may have already found his new team. It seems like the best fit for him would be with the Dallas Cowboys, although the Baltimore Ravens need him the most. Whoever gets him won’t have his services until the season his half over as he rehabs from the ACL injury he suffered last year in the Super Bowl.

The San Diego Padres have lost 17 of their last 19 games played against the LA Dodgers including the 4-0 whitewashing they suffered on Sunday.

The NFL referees have been asked to focus on illegal contact fouls called only 36 times in 2021 after averaging 97 per season from 2002-2020.

Bridge City native and former University of Texas pitcher Chase Shugart had a hand in a no-hitter pitched last week by his Class AAA Worcester Red Sox team, relieving in the final two innings to preserve the team’s first no-hitter since 2003. He was a 12th round selection by the Boston Red Sox in the 2018 MLB draft.

JUST BETWEEN US…The Houston Texans open their 2022 Exhibition football season 7 p.m. Saturday at NRG Stadium against the New Orleans Saints. Head Coach Lovie Smith feels much better about the first preseason game this season than he did last year at this time when everything was in a flux because of the Deshaun Watson debacle. The coaching staff plans on looking at many prospective players who are marginal at best, who hope to escape the first cutdown next Tuesday. However, if the Texans look good with a victory, don’t run out a buy your Super Bowl tickets quite yet!!!